David Silverman of American Atheists and Andrew Copson of the International Humanist and Ethical Union have issued a statement on the raging racism in America. They’re against it.

That these people feel emboldened to march and protest in 2017 in the United States sickens us. Their views are reprehensible, their actions are abhorrent, and they have no place in our civil society. We stand in solidarity with the targets of the hatred espoused by these white supremacists and neo-Nazis.

As many have said, bigotry in America in 2017 isn’t just people in white hoods and robes. It’s people who are our neighbors, coworkers, and even government officials engaged in subtle acts of racism, sexism, homophobia, transphobia, and religious hated. It is our obligation as humanists and as citizens of this nation—and indeed the world—to fight this bigotry at every turn.

Silence is not an option. Anyone who does not forcefully and unequivocally condemn the bigotry of these people is complicit in their actions.

Our thoughts and support are with those who have been injured in Charlottesville and the families of the people who lost their lives. We must remember that this violence didn’t start and won’t end in Charlottesville. We must be prepared to confront it across the nation wherever we find it.

I’m glad that they condemn not just the angry men and women with clubs and shields, chanting slogans about Jews, but also the silent complicity of the majority. It’s also interesting because many of the alt-right are atheists or agnostics; Richard Spencer, for example, is openly atheist.

I would say it is definitely a young movement. I’d say that it is predominantly white millennial men. It is not sort of stereotypically conservative in its profile. I’d say that probably it is a more secular population than the country overall. That is, there are a lot of agnostics and atheists or people who are just generally indifferent to religion. And I think that it is a fairly well-educated movement on average, that as I think that probably the model alt-right member has at least some college education.

So we like to argue that religion does not instill any sense of morality in people, and it doesn’t. That claim is supported by the fact that while so many corporate people resigned from Trump’s business advisory council over his fascism that he dissolved it, but no one from his evangelical council (here’s a list of some of the most horrible people in America) have taken a similar step. They’re more interested in praising Trump’s appalling responses.

However, that religious leaders are propping up racism does not mean that all believers are racist, nor does the fact that many racists are atheists mean that the atheist organization leaders are racist; it also does not imply that Nazi atheists are not True™ Atheists. What it means is that there is an additional piece of the puzzle of what makes for a good human being beyond their beliefs about a deity, and that many Christians, Muslims, and Nones are lacking that piece…and that one of the roles of any organization that intends to be a lasting, positive contributor to our society’s well being ought to include ethical principles as an essential component.

Keep in mind that while the religiously indifferent showed up in Charlottesville with clubs and shields and anger, many of the nuclei of resistance were centered around religious institutions in the city. It’s great that American Atheists is speaking out in opposition, but we also need to have atheist representatives who travel to these trouble spots and link arms with the principled clergy. We’ve got lines of men and women in funny robes forming barriers to white nationalists, and we need outspoken atheists who stand in solidarity with them. Otherwise, we cede ethical leadership to the religious. 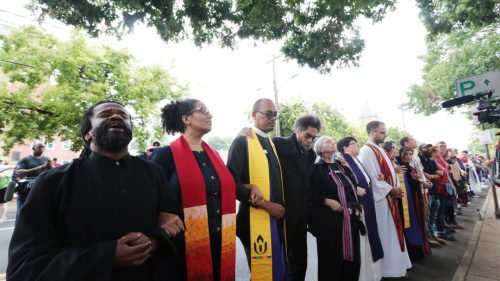 We also need to own the godless folk within the alt-right. We cannot effectively repudiate them if our first response is to deny the fact that there are a great many deplorable atheists, and if we fail to include a moral dimension in our philosophy.

Nazis cured cancer? » « How about a nice local story for a change?