This is terrible. I’m supposed to be on the side of the atheists, but I can’t help but agree that the philosophers have it right. In this comic, it’s Hannah Arendt (in gray), Mary Wollstonecraft (green dress), and Simone de Beauvoir (red scarf) vs. Sam Harris. Simone Weil and Elizabeth Anscombe help take on Richard Dawkins and Neil de Grasse Tyson in other parts. 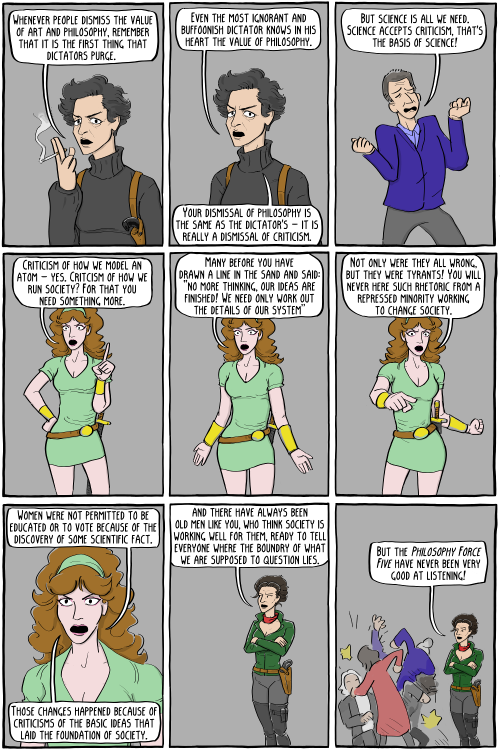 The commentary is scathing, too.

“Scientism” is the position that Science can solve all problems, or that all problems are empirical. Philosophically, it is mostly associated with the strongest statements made by the logical positivism movement, which mostly died out in the mid 20th century. Culturally, however, it is stronger than ever, and is closely tied to movements like the so-called “New Atheists”. These newer, more naive forms of Scientism, also have a strong tendency to call philosophy “a big waste of time”, “pointless arguing”, “nothing but semantics”, etc. Rhetorically, they tend to say that non-empirical ideas have no way to guarantee they are true, so are pointless to talk about. This is a rather ridiculous point to make, since their entire movement is based around spreading a certain set of non-empirical, philosophical norms, which they apparently don’t feel it necessary to open up to criticism. What they mostly seem to mean is, assuming everyone agrees with us on the important philosophic questions, such as atheism, utilitarianism, capitalism, eliminative materialism, etc., then we don’t need anything but science. Well, this is a maybe true in a strange way, insofar that if everyone agreed on every philosophical position, i.e. if philosophy was solved, then we probably wouldn’t need philosophy. Philosophy, however, has not been solved. Furthermore, if it is going to be solved, it certainly won’t be solved by a bunch of people who don’t even read or engage in philosophy. The real goal is often just to draw a border around what we should or shouldn’t question, because they don’t want any of the fundamental aspects of society to change. And, well, people who don’t want society to change often also find themselves not wanting people to even think about changing society.

This is, of course, a deeply conservative position, and reflects the politics of the people who make this sort of claim. In a lot of ways “New Atheism” is just a political movement that is attempting to secularize conservatism (in particular, it seems, the foreign policy doctrine that the United States and Europe should be “exporting” their culture overseas, i.e. governing the Earth). People who want to change society in a fundamental way, not just improve the efficiency and technology within society, seldom use this kind of anti-intellectual rhetoric. For example, Mary Wollstonecraft, in the 1700s, was trying to convince people to allow women to be educated in the same manner as men. It doesn’t take a genius to realize that science or technology alone aren’t going to solve this kind of problem. People wanting to make comparable changes today also aren’t going to be fooled into thinking that all we need is more advanced technology, or to understand atoms better or something. Somewhat amusingly (or actually probably not that amusingly), people like Richard Dawkins, when attacked for their conservative views, will sometimes try to defend themselves by saying that they actually are feminists, or whatever. But, of course, when you get down to their views and actions, it’s obvious that what they mean by “feminism” is “gender equality was already achieved a few decades ago, so everyone needs to stop complaining about it.” Sam Harris, for instance, when asked why there were so few women in the “New Atheism” movement, had this to say:

There’s something about that critical posture that is to some degree intrinsically male and more attractive to guys than to women. The atheist variable just has this- it doesnt obviously have this nurturing, coherence-building extra estrogen vibe that you would want by default if you wanted to attract as many women as men.

The “critical posture”, of course, means “people who agree with Sam Harris”. Someone who doesn’t find it necessary to read a book about a topic before writing a book on that topic can hardly be said to have a “critical posture”.

The New Atheism is a “deeply conservative position” — but not for all of us. Unfortunately, those of us who want the New Atheism to be a progressive force are being rapidly squeezed out.

Come home, you pompous buffoon » « Watch for the twitch in his left lower eyelid