Everyone talks about radical Islamists, and they definitely are terrible awful violent people (but remember, please: radical Islamist ≠ Muslim). But there are other ideologies to fear, like far right white nationalists and animal rights extremists. Acknowledging that they’re all bad, and that murdering people in the name of your cult belief is always wrong, which one is worse? David Neiwert has done the research.

Lotta words and numbers there. Maybe a graph will help. 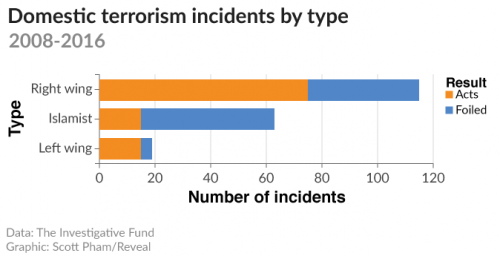 As I would have expected, the greater danger to the public is homegrown blue-eyed narrowly patriotic nativist assholes, of the kind who get normalized and treated relatively gently by the internet and media. You can kneel at the feet of alt-right idols and worship them, and everyone looks the other way; try to do that with the local imam, and you’ll find yourself in an FBI file and with tabloids breathing down your neck.

Take a look at who gets labeled as terrorists. 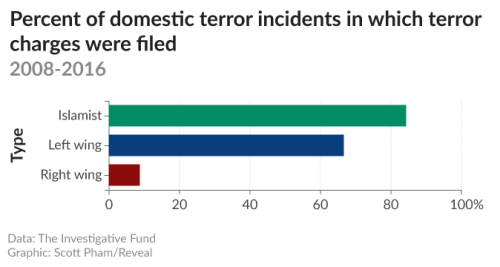 That’s striking. The bigger threat largely gets a pass from law enforcement, possibly because so many LEOs tend to be terroristic right wing ideologues themselves, if recent murders of citizens are any testimony. Maybe that will change, though, as it begins to sink in that far-right patriot movements are out to kill anyone who defends the government.

By now, the steady drumbeat of terror plots and attacks from the far right has begun to attract renewed attention, among them incidents involving the “sovereign citizens” movement, white supremacists, Patriot and militia movements, and anti-abortion fanatics, including some radical Christians. Their targets are police and military, Sikhs and Muslims, African Americans and Jews, power grids and transit hubs, abortion clinics and black churches and immigrant communities.

It’s a long read, but substantive and evidence-based. Read it and worry.