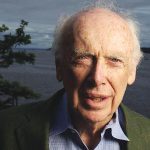 It’s long past due. He’s been shooting himself in the foot and then stuffing it in his mouth to gnaw on it for decades. He was in the news for his racist, sexist views ten years ago.

The article is like a summary of Watson’s greatest gaffes.

In 1997, he told a British newspaper that a woman should have the right to abort her unborn child if tests could determine it would be homosexual. He later insisted he was talking about a “hypothetical” choice which could never be applied. He has also suggested a link between skin colour and sex drive, positing the theory that black people have higher libidos, and argued in favour of genetic screening and engineering on the basis that “stupidity” could one day be cured. He has claimed that beauty could be genetically manufactured, saying: “People say it would be terrible if we made all girls pretty. I think it would great.”

Zuska has another one.

He smiles. “Rosalind is my cross,” he says slowly. “I’ll bear it. I think she was partially autistic.” He pauses for a while, before repeating the suggestion, as if to make it clear that this is no off-the-cuff insult, but a considered diagnosis. “I’d never really thought of scientists as autistic until this whole business of high-intelligence autism came up. There is probably no other explanation for Rosalind’s behaviour.

At that time I thought he was a horrible old man but I argued that he ought to have the right to speak freely…and he does. He speaks very freely. But what he says is neither intelligent nor insightful, and he doesn’t deserve respect for his stupid opinions. Especially when tolerance just means he never learns and keeps doing the same thing over and over again.

Now the Carl Woese Institute for Genomic Biology at Illinois has cancelled an invitation to speak.

A research institute at the University of Illinois at Urbana-Champaign agreed to host James Watson, a Nobel laureate whose work is credited with discovering the structure of DNA, to give a lecture there. But the event was quickly called off amid faculty concerns about whether it was appropriate to host someone like Watson, whose statements have been widely condemned as racist.

Watson has made numerous controversial comments over the years and also has been condemned for sexist and homophobic statements.

But his comments on race have led many to say he should be shunned.

In a 2007 interview, he said that he was “inherently gloomy about the prospect of Africa” because “all our social policies are based on the fact that their intelligence is the same as ours — whereas all the testing says not really.” Further, he said that while people hope that all groups are equal, “people who have to deal with black employees find this not true.” (He also said that some black people are smart, and has apologized, although many question the sincerity of his apology.)

I had dinner with Watson at a small restaurant in New York several years ago. It was the most uncomfortable two hours of my life. All he wanted to talk about was race, and the conversation was all about our geneaology. He asked what my ancestry was, and when I told him half Scandinavian, half Scot/English/Irish he immediately judged me acceptable company, and started explaining my personality to me. Scandinavians are intelligent but cold and aloof, and share the same problems that the Japanese have: they are among the smartest people in the world, but they lack the passion and drive to accomplish great things. You know who may not be as intrinsically intelligent, but make up for it with their aggressive need to get things done? The Scots/Irish! Best people on the planet! The perfect combination of ambition and smarts!

I think he thought he was flattering me, but I just wanted to sink into my chair and down through the floor and drop into a subway tube. Heck, dropping into a sewer line would be preferable.

It was difficult to get a word in edgewise with this guy, but after that pronouncement he looked at me expectantly — I could tell there was a question he wanted me to ask. So I obliged, knowing exactly what the answer would be. “So, Jim, what’s your ancestry?”

And then he regaled the table with tales of brave explorers and pioneers and soldiers, all his people. I tried to strike up a conversation with his wife, instead, who seemed very nice and a little distressed at her husband’s mania.

So, yes, I’ve heard more than enough of Jim Watson. I think we all ought to be a bit Watsoned out at this point, and I don’t see any purpose in inviting him to give public lectures anymore. You never know: he might launch into a fact-free fairy tale about having dark skin, being fat, and being over-sexed as linked properties caused by exposure to the sun and living in tropical countries, illustrated with a slide show of women in bikinis.

He really did that.

I’m just surprised that any professional organization would be so unaware of his reputation that they’d invite him in the first place.