What is it about the shroud of Turin that short-circuits people’s critical thinking? A recently published paper by Catholic weirdos claims to have carefully scrutinized the piece of cloth, and that they can interpret some of the patterns there as an image of Jesus’ scrotum.

Yes. You read that correctly. There are peepers trying to get a look at Jesus’ twig & berries.

I can’t get at the paper itself, nor am I particularly interested — except, maybe, as another example of pareidolia. You might as well stare at medieval paintings of a naked Jesus and then claim that you’ve acquired deep insights into the biology of a person dead 2000 years ago. Oh, wait, gosh, that’s exactly what some people are doing. Some artwork shows Jesus in feminine poses, or with ambiguous sexuality, so it’s open season on speculation.

A late fifth/early sixth-century mosaic in what is known as the Arian baptistery in Ravenna, Italy shows Jesus, naked in the river Jordan, with genitals clearly visible to the viewer. The rest of Jesus’ body is ambiguously gendered. He is depicted as clean-shaven, youthful, and even slightly wide-hipped. Some have argued that he is androgynous. Regardless of how we assess Jesus’ gender in this scene, the mosaic is pointing us to the idea that Jesus really was a human being, not merely appearing as one.

There are no contemporary accounts or images of Jesus. The portrayals you seen now, or in the fifth century, or in the Medieval period, or during the Renaissance, were all artistic renditions that more reflected the culture and concerns of the artist than anything about the dead guy on a stick. It’s fine to talk about the values of 5th century Ravennans in the context of the art they made, but it is utterly bonkers to use that to discuss the biology of someone who died 500 years before, in another part of the world.

In 2014, Dr. Susannah Cornwall, who teaches at the University of Exeter, caused a stir when she published an academic article arguing that the sex of Jesus was simply a best guess. She wrote, “It is not possible to assert with any degree of certainty that Jesus was male as we now define maleness.” Correctly observing that it is difficult to speak definitively about the genitalia of an unmarried person with no children, she added, “There is no way of knowing for sure that Jesus did not have one of the intersex conditions which would give him a body which appeared externally to be unremarkably male, but which might nonetheless have had some ‘hidden’ female physical features.”

There is no way of knowing is the operative phrase there. I’m fine with the idea that Jesus’ masculinity was a rather irrelevant part of the myth, but annoyed with the baseless dissection of genitalia that aren’t there. But then, it’s also the case that we don’t know that Jesus had a beard, or long hair, or a fine Aryan complexion, so all we’ve got is cultural bias on those trivial details.

But now some unhinged people are excited that they might have a “photo” of Jesus’ crotch.

Newly published scientific investigations into the Turin Shroud have identified the outline of the scrotum and right hand thumb of the man outlined on the cloth. If the Shroud is authentic, this would seem to supply clear evidence that Jesus was, in fact, male.

If the Shroud is authentic, but, as the article points out, it isn’t. And if this picture were accurate, then Jesus rode a dinosaur. 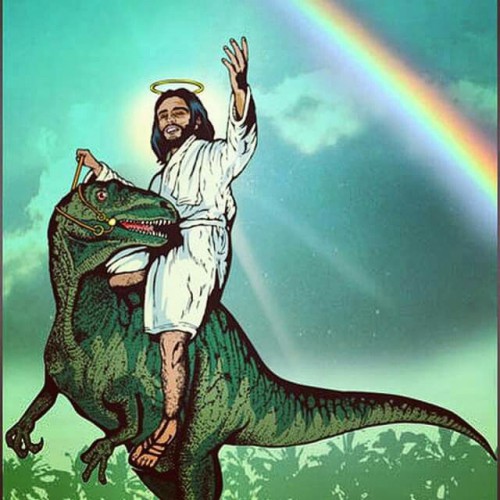 The “ifs” are strong in this article.

An authentic foreskin relic would do a lot more than establish the sex of Jesus. If, in our twenty-first century, we had a piece of Jesus’ body, the problem would no longer be heretical claims about his gender or non-divinity, but rather the potential for sacrilege. If we had the DNA of God it would only be a matter of time before somebody wanted to clone him.

If we had a tiny scrap of human tissue from the first century, I’d think the first question to ask would be how you know it came from a specific individual (let alone one with magic powers), so I don’t see how any of this creative speculation allows you to say anything about the prophet who supposedly founded the Christian faith.

But then, this is a subject that does seem to scramble even relatively intelligent minds.