Since someone in this thread is trying to suggest that there might be a gender-based difference in ability to pursue careers in STEM fields, this chart is most appropriate. 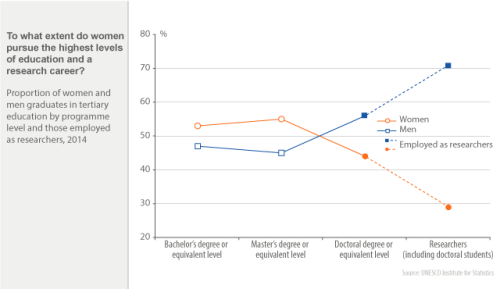 That fits with my experience. On average, the undergraduate women I teach are just as capable as the men — if they weren’t confidential, I could show you my gradebook and you’d see that it’s women who consistently stand at the top of the class. Yet somehow, after they graduate, their participation in science careers plummets. I don’t think they turn stupid after getting their degree; I remember my peers from my graduate school and post-doc days, and no, all of them were scary smart or they wouldn’t be there. I think it’s more that harassment takes its toll (most of which I was oblivious to at the time, but afterwards, I’ve had women tell me about it, and it was an eye-opening “Oh, yeah, he was kind of creepy, wasn’t he” sort of revelation), and disrespect (I definitely knew older faculty who saw women as good technicians, but not smart enough to do creative work) and judgmental attitudes (“she’s just going to get married and pregnant and leave the field anyway”).

We are not yet creating equal opportunities. Don’t try to tell me that women are less capable when I deal with brilliant, hard-working women in science every day.