I had a terrible thought yesterday. I was born during the Eisenhower administration, but I don’t remember it; I do recall Kennedy and the 60s, and Nixon, and the march through ever worsening presidents. Now we have Trump, and I realized that, at my age, he could be my last president, especially since Trump is going to gut the health system during a period I may need it most. This span of time representing the agonizing death of American idealism, decline of liberalism, and collapse into corruption has played out as the background of my life.

That’s depressing. History is not going to remember me, but I managed to live through a terrible period that will be remembered, unpleasantly. It would be nice to go out on a note of optimism, but that’s probably not going to happen.

Unless y’all get cracking on that revolution, that is.

Since this “self care” thing is buzzing around here, I took most of yesterday off.

And then I realized I’m not a “self care” kind of guy. I’m a “batter myself into rage and despair” kind of guy. This wasn’t helping. So I read some of the news.

Donald Trump is president. He gave a speech full of malevolent nationalism and jingo, and practically the first thing his administration did was edit the White House web page. What got deleted? climate change, LGBT rights, health care. What got added? Promises to increase support for the police. He signed executive orders to begin the demolition of the affordable care act.

Ah, the promise of a bright future. See it sailing away on a moonbeam bouncing off a rainbow? Wasn’t it pretty?

His inauguration was a dud, a parade marching past empty bleachers. But he’ll take care of that: the Tweeter-in-chief quickly banned the interior department from posting factual information about the low attendance.

The first noted the new president’s relatively small inaugural crowd compared to the number of people former president Barack Obama drew to the National Mall when he was sworn into office in 2009. The second tweet noted several omissions of policy areas on the new White House website. A Park Service employee retweeted both missives on Friday.

“All bureaus and the department have been directed by incoming administration to shut down Twitter platforms immediately until further notice,” said an email circulated to Park Service employees Friday afternoon.

Without a hint of irony, of course, Trump later announced that he was going to keep on tweeting because “You know, the enemies keep saying oh, that’s terrible, but it’s a way of bypassing dishonest media right?”

And then came multiple accounts of people being harassed and blocked at the Canadian border.

The group was brought in for secondary processing, where the border agent asked about their political views, Decunha told the Canadian Broadcasting Corporation. “The first thing he asked us point blank is, ‘Are you anti- or pro-Trump?’”

That is chilling. I’ve always found the border guards on the American side to be major assholes, but this is a new low. We’re going to impede the travel of people on the basis of their political affiliation? That’s going to be awkward, since most Canadians are going to be anti-Trump.

As are most Americans, for that matter.

By the way, as long as we’re turning away ladies with pink hats at the border, what’s the deal with professional hate-monger Milo Yiannopoulos getting a free pass to incite violence in the USA? Fuck that guy and his trollish little minions.

I was getting angrier and angrier. These are and should be angry times. But then I saw one thing that brought a smile to my face and made me laugh a little, even: white supremacist Richard Spencer getting punched in the face. I watched this several times, feeling my mood lift a little each time.

The rainbows and moonbeams are gone. All pretense that we live in a democratic state ruled by the law and custom are gone. The illusion of civility is gone.

It wasn’t that punch that killed them, though. It was a minority political party that discovered that going rabid was a way to intimidate political opposition. It was when the Republicans so fully committed to obstructionism that they refused to accept the Constitutional rule that the President selects Supreme Court justices. It was the erosion of education to produce an ignorant electorate. It was the replacement of a critical, investigative media dedicated to ferretting out the truth with a mob of pandering airheads who just wanted to babble for 24 hours a day. It was a party that used gerrymandering, voter suppression, and lies to gain power. It was both parties feeding at the corporate trough.

It was ten million things that exposed the corrupt lie at the heart of our government.

That punch was just a sign that maybe some of us are going to fight back.

Of course that immediately prompted maudlin cries that we must deplore punching Nazi scum in the face. I don’t think so. When the Nazi scum are advocating oppression and the persecution of people they don’t like, when they have gotten their toes in the halls of power, that is what you deplore, not the fact that the representatives of genocide and hate receive well-earned tokens of contempt. They can have free speech. They also have to accept the consequences of that speech.

Stop making excuses. Stop regarding manners and politenes and civility as the alpha and omega of civilization. We are in an existential conflict with barbarians who use our unwarrantedly high regard for manners as an effective mask for ideas that kill people.

Time to rise up and fight. 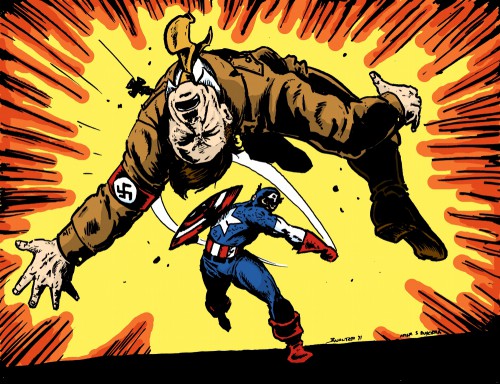