We are not a nation of laws, if we ever were. We are a rogue state, a banana republic, and we always have been…we’ve been held together with a tissue of cherished myths about Democracy and the Republic and Service and Citizenship, when the truth is that those values are unenforced, and the real rule is that the rich can get away with anything they want. 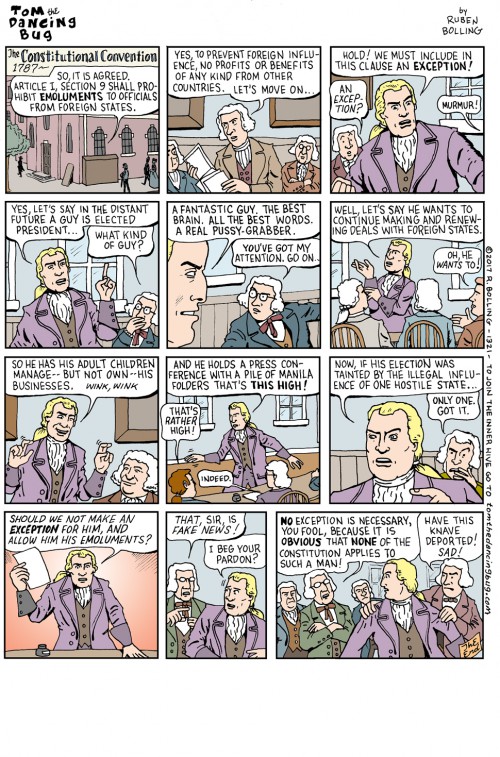 We’ve also been watching the gradual replacement of “liberty and the pursuit of happiness” with the Libertarian myth of “I got mine, so fuck you.” I can’t even console myself with the old gloss of American idealism anymore when naked capitalism has become the raison d’etre of the state.

So how about them senate hearings on the Trump adminstration, hey? Perfect examples of the failures of our government. We sort of lied to ourselves and said before that maybe the electoral college would save us, that it’s whole purpose was to prevent unqualified demagogues from taking power. We sure fooled ourselves with that one — the purpose of the electoral college is to perpetuate the power of the obscenely wealthy and comfortable elites. And now we have a series of hearings on Trump nominees, all carried out in the vain illusion that they will act to block incompetents and corrupt cronies of the head of state from getting their hands on the tools of state. Do you believe it?

Jeff Sessions is a racist buffoon. The senate will judge him next week. I predict that he will be approved, not because he actually reassured us all that he is a good man, but because the rubber stamp is poised and ready.

Right now we get the spectacle of Betsy DeVos being alternatively praised/massaged by Republican ideologues, and subjected to critical questioning by the powerless minority party.

DeVos is a bigot who profited off the Amway pyramid scheme.

Both the DeVoses and the Princes have been key supporters of Focus on the Family, which was founded by the influential evangelical leader James Dobson. In a 2002 radio broadcast, Dobson called on parents in some states to to pull their kids out of public schools, calling the curriculum “godless and immoral” and suggesting that Christian teachers should also leave public schools: “I couldn’t be in an organization that’s supporting that kind of anti-Christian nonsense.” Dobson also has distributed a set of history lessons that argue that “separating Christianity from government is virtually impossible and would result in unthinkable damage to the nation and its people.” The Dick and Betsy DeVos Family Foundation gave $275,000 to Focus on the Family from 1999 to 2001 but hasn’t donated since; it gave an additional $35,760 to the group’s Michigan and DC affiliates from 2001 to 2010. The Prince Foundation donated $5.2 million to Focus on the Family and $275,000 to its Michigan affiliate from 2001 to 2014. (It also gave $6.1 million to the Family Research Council, which has fought against same-sex marriage and anti-bullying programs—and is listed as an “anti-LGBT hate group” by the Southern Poverty Law Center. The FRC used to be a division of Focus on the Family before it became an independent nonprofit, with Dobson serving on its board, in 1992.)

She will demolish public education to promote racial inequities.

Yet, for all of the Obama administration’s education policy failures, the DeVos appointment has the potential to be catastrophic. It represents a clear and present danger to the wellbeing of scores of students of color who have been most heavily impacted by privatization and the gutting of multicultural education. Nationwide, African-American, Latino, and Native-American students continue to have the lowest graduation and college-going rates. They are less likely to be taught by well-qualified teachers and more likely to be in schools where college counselors are either absent or saddled with too many students. Indeed, some urban schools of color have more school police than college counselors. And because many students of color don’t have equitable access to college prep curricula in the humanities and STEM disciplines, they have higher attrition rates when they go to college.

She is criminally incompetent and unsuited to the post.

As nearly as I can tell, the nominees for the president-elect’s Cabinet fall into several different categories. There are the people you’d pretty much expect from any Republican administration. (James Mattis, Stephen Flynn, Ryan Zinke). There are the people who understand the mission of their departments and have spent their lives undermining it. (Jeff Sessions as Attorney General, Rick Perry at Energy, Andrew Puzder at Labor). And there are the people who are fundamentally clueless about the general nature of public service. (Rex Tillerson at State.) On Tuesday night, DeVos demonstrated that she is that rarest of Trump administration fauna: Someone who fits capably into all three categories.

She and her family and the Amway gozillions they control have been a bottomless reservoir for the dark money that is the engine behind a dozen different conservative fetish objects, from right-to-work laws, to gutting campaign finance regulations, to injecting splinter Protestantism into every part of the political commons. So she’s pretty much what you’d expect from any Republican administration. She understands the mission of the Department of Education and truly dislikes it. And, as was graphically demonstrated even in the truncated questioning Tuesday night, she doesn’t know enough about education policy to feed to your guppies.

Do any of you believe for one minute that her nomination will be stopped by anyone in our government? Not I. She has demonstrated her talent for kleptocracy in Michigan already, she is an ill-gained billionaire, she intends to promote ignorance, and she has all the petty bigotries of the capitalist ruling class, so of course she will sail through and get a choice spot in which to loot the educational system and be a cheerleader for theocracy.

All that stuff about separation of church and state and an informed citizenry and responsible representative government from the founding fathers (who are deified by the Republican party) was a smokescreen to cover a wealthy power grab. I can’t believe it any more. Many thanks to the Republicans and Trump for at least stripping the pretense and exposing the naked truth.

I fear my own views on the American government. When a nation works so hard to lose all the confidence of its people, upheaval is not far off.

I get email…from the presidential inauguration committee? » « I’m a little worried about teaching genetics