While it’s true that Obama is going to acquire a glowing halo of sanctity in comparison to the shambling beast that comes after, I would remind you that he was far from perfect. In particular, his foreign policy was rather hawkish and brutal to civilian populations.

In President Obama’s last year in office, the United States dropped 26,171 bombs in seven countries. This estimate is undoubtedly low, considering reliable data is only available for airstrikes in Pakistan, Yemen, Somalia, and Libya, and a single “strike,” according to the Pentagon’s definition, can involve multiple bombs or munitions. In 2016, the United States dropped 3,027 more bombs—and in one more country, Libya—than in 2015. 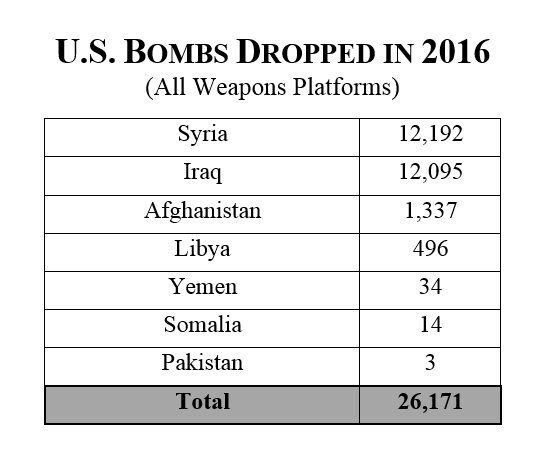 Right. We’re kinda sorta at peace, but for some reason we dropped 26,000 bombs on brown people in distant countries.

I’d like to ask the next question: how many people are killed, on average, with every bomb dropped? If it’s a very small number, then we can question the efficiency of a strategy that terrorizes populations and causes destruction but doesn’t, you know, kill that many ‘enemies’. If it’s a middling number, say 10, then the United States killed a quarter of a million people last year.

If it’s a large number, then we are guilty of atrocities to rival the worst despotisms.

Course Design: Behold! A Syllabus! » « Another culprit in the murder of expertise