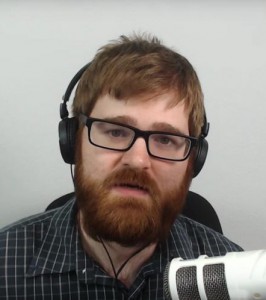 This sad, unqualified, pathetic troll is now an advisor to Donald Trump’s team.

He’s got nothin’. He graduated from college a few years ago with a bachelor’s degree, started an overblown blog that he called a news source, and parlayed inventing far-right lies and calling Obama “gay” into a career that endeared him to other liars, racists, and various neo-Nazis.

Despite his disregard for facts and reckless approach to publishing, Johnson, who was recently photographed at a dinner attended by white supremacists in Washington, D.C., built a significant following among many who self-identified as being a part of the “alt-right.” Trump drew significant support from those same followers during the election.

Mike Cernovich, another pro-Trump troll who is friends with Johnson, said that Johnson often has a hand in behind-the-scenes politics. The media really likes to hate on [Johnson], Cernovich said. But if they knew how influential he has been–in ways they didn’t know–it would be kind of mind blowing.

This is apparently all you need to become influential in the new administration. You can be a guy whose main claim to fame is that people spread scatological rumors about him and his acquaintances find them plausible, and still play a role in shaping American policy.

Is this a great country or what?

Solitudinem faciunt, pacem apellant » « True confession: I did not care much for Meryl Streep’s speech