One man’s quest: to have sex with teenagers. His tools: misconceptions about biology, access to a meme-maker, and boundless self-pity. Ladies, meet Lucas Werner…and run away.

He’s an atheist in Washington state, going by the name “OlympiaAtheist” on facebook. I wish he wouldn’t. Atheists have enough reputation problems as it is.

His obsession — it really is an obsession, it’s basically all he writes about — is that he’s 37 years old, he wants a girlfriend who is less than half his age, and that he thinks he is biologically entitled to have sex with younger women. His strategy is to create terrible, terrible meme images and post them on the web, which I’m sure is going to draw in the high school girls like bees to honey. Here’s one example. There are many more. 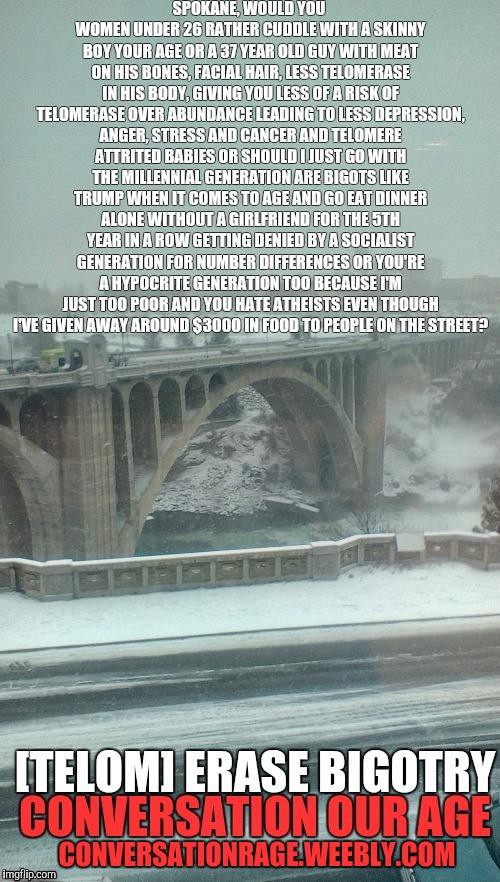 You should have sex with him, because he has lower telomerase levels than younger men, and therefore he’s not going to give you cancer. And you’re a bigot and a hypocrite if you don’t take him up on his kind offer. Here’s a photo of a bridge.

I’m afraid that what jumped out at me first was not his privileged arrogance, but his bad biology. There is no such disease as “telomerase over abundance”. You can’t catch telomerase from other people. Telomerase is not a secreted protein. Even if it were, you’re not going to absorb it from contact. Telomerase is primarily produced in the germ line, in your gonads, and even there it is tightly regulated to be expressed during the synthesis phase of meiosis to lengthen telomeres, the ends of chromosomes. The absence of telomerase in somatic cells allows gradual telomere shortening with cell division to be a kind of countdown timer for senescence, which is actually a good thing: it means cell populations have a limited life time, which reduces the accumulation of mutations that can lead to cancer. Many cancers switch on telomerase as part of the process of immortalization. You want to learn more? read this short paper.

Telomerase is probably not a factor in determining the differences in aging rate among species. Telomere shortening resulting from the absence of telomerase activity may be a factor in determining some age-related properties of organs in humans. Reactivation of telomerase could be useful in some forms of cell therapy and does not appear to present a problem with safety. However, activation of telomerase removes a barrier to the continued growth of developing cancers; lack of telomerase activity provides a tumor suppressor function. Telomeres in the sperm of older men tend to be longer than the telomeres in younger men, due to the continued activity of telomerase, which may contribute to longevity of their offspring; however, their sperm also contain more mutations, which may offset that advantage.

OK? Telomerase levels are irrelevant in your interactions with other people. Somehow Mr Werner has got it in his head that it matters. He talks endlessly about it.

He has another pseudo-scientific biological justification. You should have sex with him because he’s diploid. 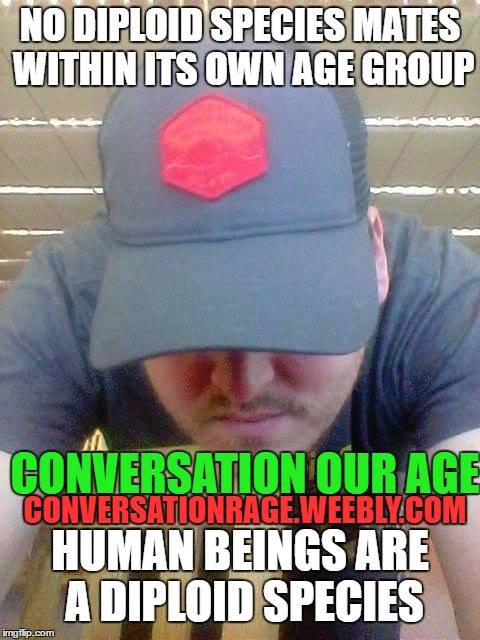 At least he’s right on one thing: he is almost certainly diploid, as are all other adult humans.

But let’s get back to telomerase again. Telomerase is only expressed in human spermatogonia, which to Mr Werner’s sick sad mind implies that it is properly applied by… 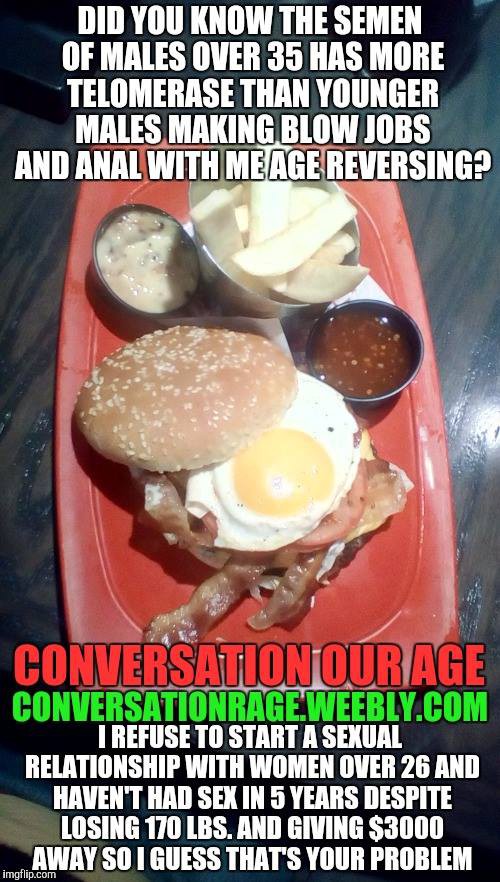 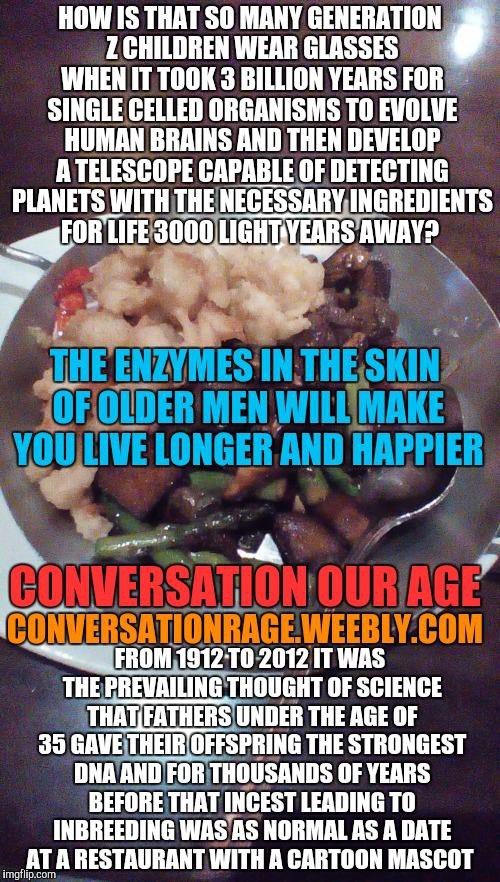 If he’s still talking about telomerase, and I suspect that he is, that enzyme is not expressed in human skin. I don’t know why he thinks older fathers has anything to do with glasses and telescopes, and that whole business about “incest leading to inbreeding was…normal” is just weird. I have no idea what hes trying to get at with that.

Yes, he is talking about telomerase. 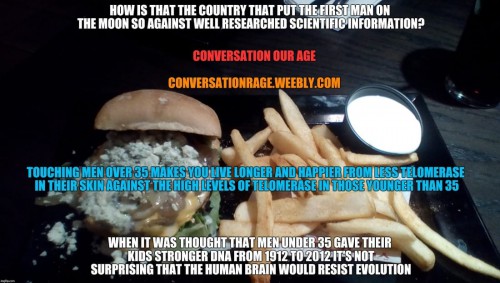 How can you disagree with him when our nation sent men to the moon?

Here’s my favorite pick-up line of all time. 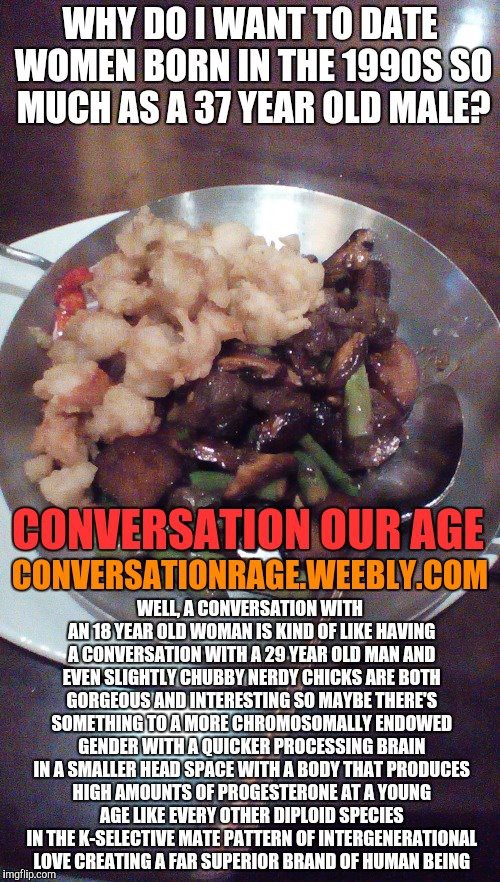 Well, a conversation with an 18 year old woman is kind of like having a conversation with a 29 year old man and even slightly chubby nerdy chicks are both gorgeous and interesting so maybe there’s something to a more chromosomally endowed gender with a quicker processing brain in a smaller head space with a body that produces high amounts of progesterone at a young age like every other diploid species in the K-selective mate pattern of intergenerational love creating a far superior brand of human being

So much bullshit biology and condescension packed in there, I may die.

Actually, what’s going to kill me is his food photography. I have totally lost my appetite, I fear for ever.

The latest drama is that poor Mr Werner got banned from a Starbucks for hitting on a young barista. 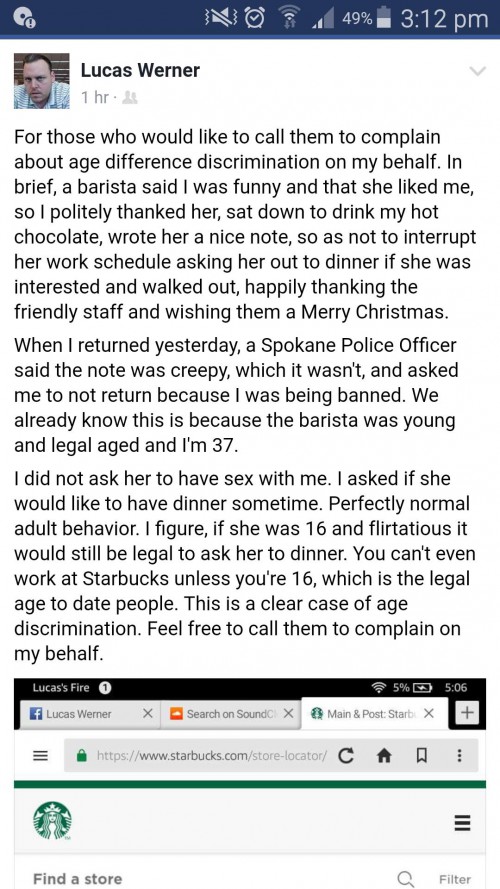 He just left her a nice, innocent little note, which he unfortunately did not bother to include for posterity. The Spokane police said it was creepy. I’m not usually inclined to trust the police, but given the general tenor of what he writes, I know which side I’m inclined to believe. He probably did not ask her to have sex, but instead told her about the enzymatic virtues of Old Man Semen. It’s all her fault if she does not like Scientific Information.

I do find it reassuring that the police are now aware of him, and I think it’s a good idea for the women of Spokane to know that he’s hovering about, taking hideous photos of ugly fast food while fantasizing about coating your colons with his enzymatically potent semen. Just so you know, here’s his website (which is even more delusional than the crap on his memes), and here’s what he looks like. 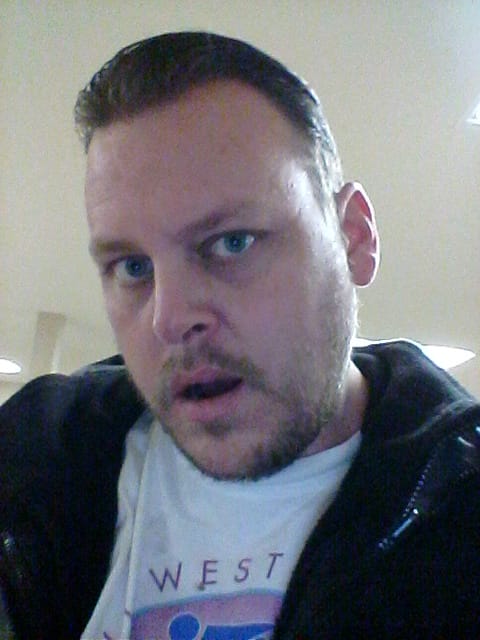 It’s the same old racist genetics » « A day of mourning