In case you’re confused, here’s the text description of what’s going on in that video.

When put together with gravid females, males seemed to be attracted, moving directly towards the female and joining her for mating. On rare occasions males were not attracted to females, and this presumably occurred when females had started to absorb eggs. For mating, the male curled around the anterior end of the female exuvia, bringing his cloaca close to the mouth opening in the exuvia (Fig. 2). During mating he held the female with his first pair of legs, and the female stimulated the male by moving her stylets and contracting the sucking pharynx. Mating took about 1 h, and semen was ejaculated several times (visible under the light microscope). Exactly the same mating behaviour was observed more than 30 times in more than 30 tardigrade couples, and mating was also documented on video.

Still confused? Perhaps it would help to know that they’re bisexual, and there aren’t any anatomical differences between the sperm-producing male and the egg-producing female. Here’s a close-up of their external reproductive organs. 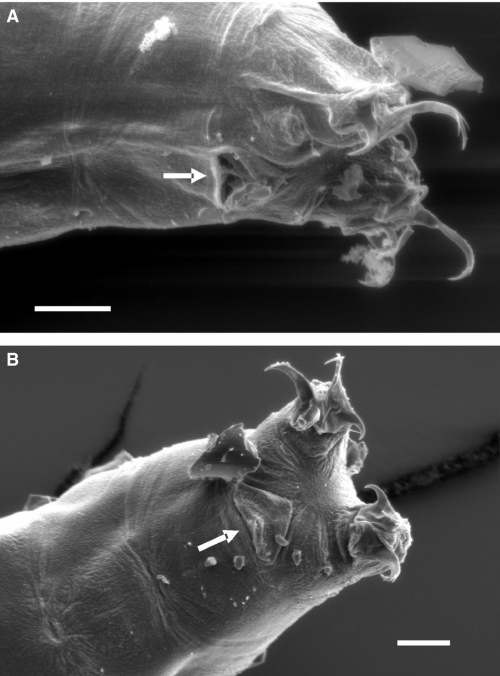 Cloaca (indicated by arrow) of two individuals of Isohypsibius dastychi. The cuticle opens anteriorly. A, cuticle covering the cloaca is pushed towards posterior end of the animal. B, cuticle in the natural state. Scale bar = 10 μm.

Surely everything is clear now! Just in case, here’s a simplified diagram of the Standard Tardigrade Sexual Position.

Mating position of Isohypsibius dastychi. The male (left) held the female (right) in the moulting stage, with eggs (in this case three) clearly visible in her ovary.

Distressing thought: if you are a tardigrade, it looks like you can get pregnant from oral sex.