Years ago, I imagine that the management of the New York Times met to work out criteria for who would write the opinion columns in the paper. They walked in with one iron-clad commitment: they believed in “balance”, you couldn’t just bring on writers of reason and evidence, because that would be unfair to the right wing. They also tut-tutted the awkwardness of strong language and vigorously supported opinions, so they needed to find a middle ground. They decided that the way to fill their quota of conservative voices was to simply hire deeply stupid people.

And this is how Thomas Friedman, David Brooks, Maureen Dowd, and Ross Douthat got their sinecures on the pages of the prestigious (but losing its luster) New York Times.

I think David Brooks is the worst of them, but then every time I read anything by Friedman I feel like changing my mind. This doesn’t happen often, though, because Friedman makes me vomit out of my eyesockets, which is generally incompatible with being able to read further.

Matt Taibbi has a stronger constitution than I do, apparently, and reviews Friedman’s latest metastatic column, I mean “book”, Thank You for Being Late. He is very unkind. Not unkind enough, but he gets close to what we need.

We will remember Friedman for interviewing 76 percent of the world’s taxi drivers, for predicting “the next six months will be critical” on 14 occasions over two and a half years (birthing the neologism, “the Friedman unit”), and for his unmatched, God-given ability to write nonsensical metaphors, like his classic “rule of holes”: “When you’re in one, stop digging. When you’re in three, bring a lot of shovels.”

Friedman’s great anti-gift is his ability to use many words when only a few are necessary. He became famous as a newspaper columnist for taking simple one-sentence observations like, “Wow, everyone has a cell phone these days,” and blowing them out into furious 850-word trash-fires of mismatched imagery and circular argument.

Taibbi singled out one example of Friedmanesque unprofundity: this graph, intended to illustrate his claim that we’re being overwhelmed by our own technology. 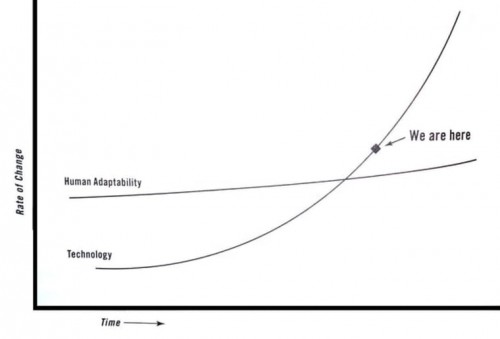 Bad timing. I’ve been grading lab reports lately, so I’m particularly sensitive to abominations like that. Label your axes! What are the units? Are “adaptibility” and “technology” even measurable in the same way and with the same units? Hey, the ordinate is “rate of change” — do you actually intend to argue that human adaptability, for instance, is increasing? Where’s your evidence? And then I draw big red slashes through the whole thing and tell the student that this is unacceptable, you get a 0 for this assignment, go back and rewrite it.

No, really, this is disgraceful. It’s an obvious attempt to pretend that a subjective claim is factually objective by falsely casting it in the form of a quantitative measurement. You don’t get to do that.

And then it gets worse. Friedman draws a second version of the graph, with his suggestion for how we can correct this mismatch between adaptability and technology. 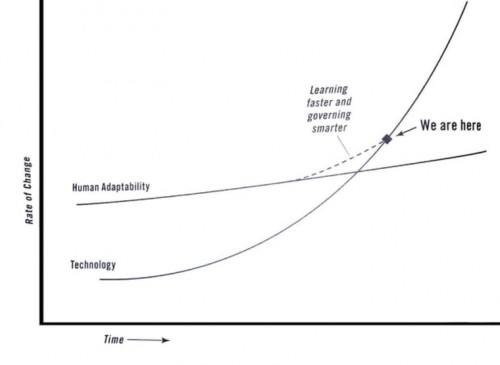 Hey, my metaphor of vomiting out of my eye sockets no longer looks so hyperbolic, does it?

So the Friedman solution for our current production of excess technology beyond our capacity to absorb (a problem that he hasn’t actually shown to exist) is to build a time machine, go into an undefined moment in the past, and make people “learn faster”. He’s written a whole book about an undemonstrated problem, illustrated it with a bogus graph, and solved it by drawing a line on the graph that shows he doesn’t understand his own illustration, and that requires multiple amazing technological feats to accomplish…in a book that complains about the rapidity of our technological advances.

I know what this means. He’s trying to get a raise from the NY Times by feeding them more of what they hired him for.

There’s a hook in this » « Do we really want to encourage people to rewrite Christmas carols?