I’m completely missing Halloween this year, but if I had gotten back in time, I’d have been tempted to print out copies of this little fake Chick tract to hand out to the Christian kiddies, instead of candy. 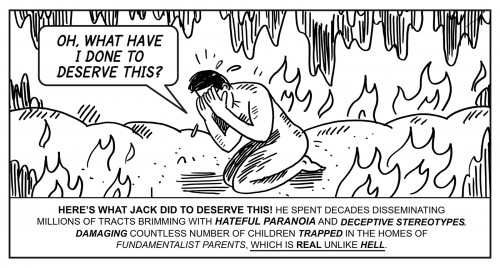 Nah, I’m lying. I’d never do that — I always despised those sanctimonious people who handed out tracts instead of candy. But since I can’t pump candy over a satellite link to all of your computers, I’ll have to settle for bits instead.

Oy, can I turn around and go back to China? » « Happy Halloween!