This is apparently intended to be a criticism of evolution posted by a Jehovah’s Witness. I don’t quite get it. 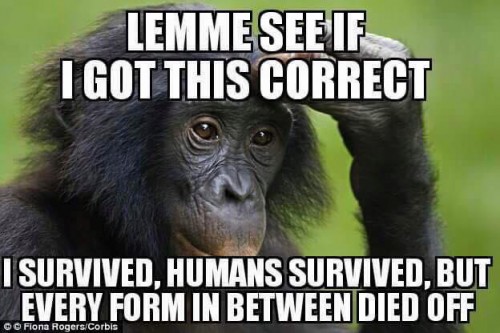 Lemme see if I got this correct.
I survived, humans survived, but every form in between died off

Yes. Everything died. Every individual between the current extant cohort and the last common ancestor died. It’s what organisms do. Is this so hard to understand? But that does not imply that every possible intermediate form existed and died. They may also be confusing individuals with populations, but I find it very difficult to read the minds of creationists. 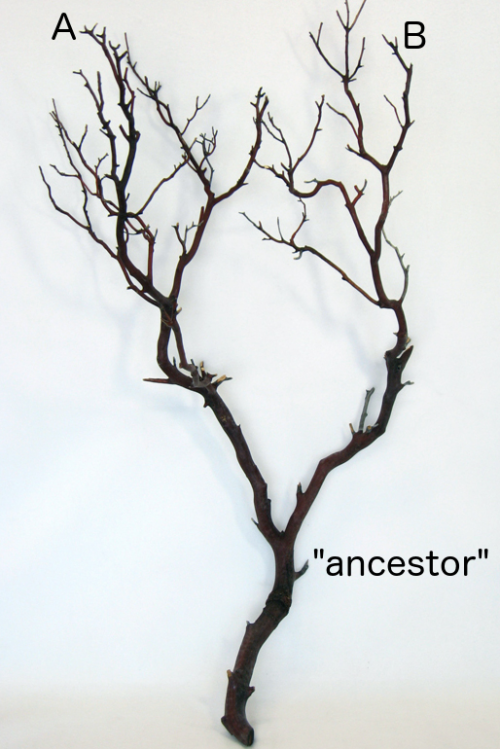 There is a twig at A (call it humans), and there is a twig at B (chimps), and there is an ancestral branch point 6 million years ago. A population of cells at the “ancestor” point divided multiple times and split into two extending meristems that produced the branch leading to A and the branch leading to B. I think our creationist is assuming that there had to have been a solid sheet of wood filling the space between A and B, that the space of all possible positions for twigs had to be filled, and that it was somehow pruned back selectively to create just the two twigs.

But that would make no sense, wouldn’t fit our understanding of how branches form, and would be really stupid. They can’t possibly think that, can they?

Mary’s Monday Metazoan: he must be starting classes this week, too » « But skeptics don’t believe in deja vu!