Ray Comfort’s new “movie”, The Atheist Delusion, is available for download today. It’s another of his ambush interview shows, where he and his handheld camera go to random people on the street, he asks a loaded question of some sort, and then he pretends to have stunned them with some deep insight, aided by selective editing of the video. It’s cheesy and dishonest, and really boring — it’s the same way he’s made his previous schlocky messes.

This time, he’s been promoting it for months with this kind of promise: 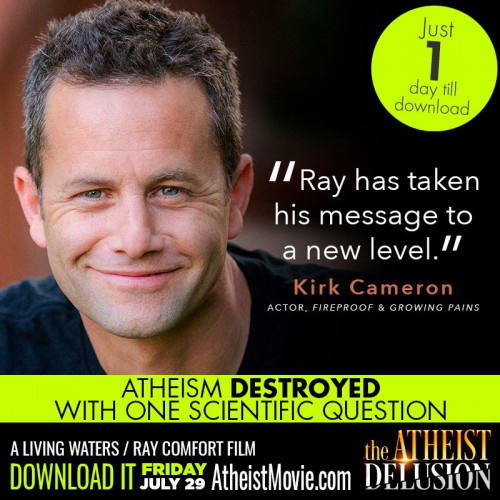 ATHEISM DESTROYED WITH ONE SCIENTIFIC QUESTION. Right. Like ol’ Ray would recognize science if it were a miniaturized complex electronic device that he could hold in his hand and then use to edit and upload video images to a larger network of computers accessible to the entire world, or something.

You know that he’s lying, though. It’s telling, because if an evangelical preacher actually had a devastating criticism of atheism that could be expressed in one single question, then why would he hide what it was for months, and bury it in a bad movie that everyone had to pay to see? Shouldn’t he be out slaying atheism right and left, and sharing his great question with his fellow travelers so they can carry out mass conversions everywhere?

The explanation for that reluctance to reveal it is obvious, though. He doesn’t have a good scientific question, and if it were made known, the scientifically competent scientists would all be rolling their eyes and saying “Pfft!” and posting the answer. He relies entirely on surprising unprepared and scientifically naive young people in order to get the responses he wants.

I’m not going to buy the video. I don’t think I could even bear to watch any of it, if it were given to me for free. But I did find a review that gives away the “scientific question”.

The Argument From DNA

How did the majesty of creation emerge without some sort of intelligent designer? How could that possibly have happened? This has convinced most people of the existence of God throughout the generations. However, with the advent of modern science, this debate has evolved. Atheists of old may have hypothesized that perhaps everything in the natural world arose as a result of natural processes. But they did not have a model for understanding that process, as seemingly provided in the Theory of Evolution. Ray pointed out that the advent of science has given rise to another aspect of the argument for God’s existence, namely, the DNA molecule.

In an effort to elucidate the point that he was making, Ray showed the atheists in his interview a book comparing pictures of natural structures with the structures of engineering. Then he posed the question that has confronted many thinkers throughout the ages. Could this book have occurred by chance, from nothing? The answer is that it obviously could not have. But then, argued Ray, the DNA molecule contains information, it contains a message, and as such, it could only have derived from intelligence. Just as we recognize that the words on the page of a book derived from intelligence, we also recognize that the information that is transmitted in the DNA molecule must have derived from an intelligent designer.

This isn’t new, it isn’t deep or surprising in any way. It’s simply Paley’s argument again, that gosh, biology is really complicated, therefore it must have had a really complicated designer. Paley, at least, presented his argument forthrightly to the intelligentsia of his time, and didn’t jump out at skateboarders at the local park and demand an immediate, in-depth philosophical analysis.

This feat of illogic is so old and routine that it was shot down long ago by Percy Shelley, in A Refutation of Deism.

Design must be proved before a designer can be inferred. The matter in controversy is the existence of design in the Universe, and it is not permitted to assume the contested premises and thence infer the matter in dispute. Insidiously to employ the words contrivance, design, and adaptation before these circumstances are made apparent in the Universe, thence justly inferring a contriver, is a popular sophism against which it behoves us to be watchful.

He wrote that in 18-freakin’-14. That’s how old and dead this “scientific” question is, and how long ago it was shot down by a poet.

That’s also why he didn’t publicize his amazing “scientific” question in the promos for his “movie” — there’d be moans from every cemetery as all the old dead scientists and philosophers rose from their graves to slap goofy Ray Comfort upside the head and berate him for his ignorance.

Scientist smackdown! » « I’m just going to call him the Amazing Racist from now on