This week, Nature has an article on the reconstruction of global tectonics during the past 200 million years. 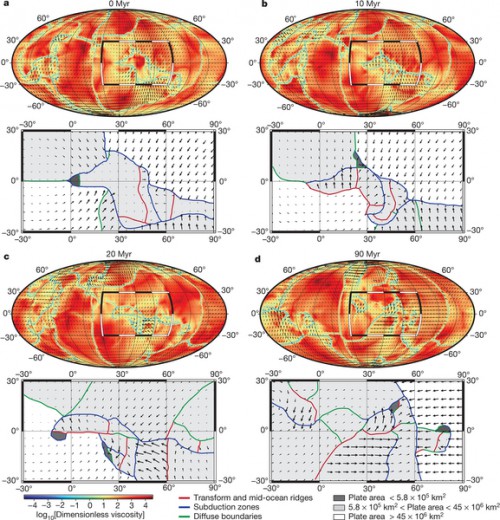 a–c, Maps are separated by 10 Myr. The shapes of the large plates do not change much, whereas the adjustment of the small plates evolves quickly. d, 90 Myr after the first snapshot (a), the distribution of the large plates and smaller plates has evolved substantially. In a–d, the top panels show the viscosity of the mantle (colour scale); the bottom panels show the different boundary types (coloured lines) and plate sizes (shading) within the boxed regions in the top panels (which focus on longitudes between −30° and 90° and latitudes between −30° and 30°). The arrows indicate the direction and magnitude (represented by arrow length) of the mantle flow.

In Science, we can read about a thorough analysis of a site where a mastodon was butchered by North American hunter-gatherers 14,550 years ago. 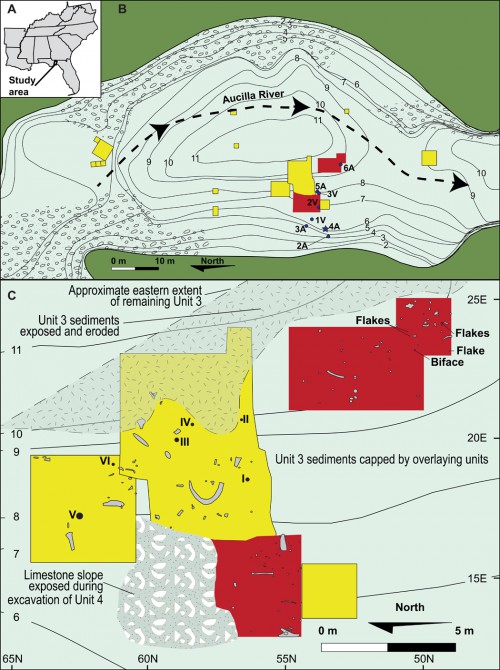 And of course, the big news, scientists have put a probe in orbit around Jupiter. 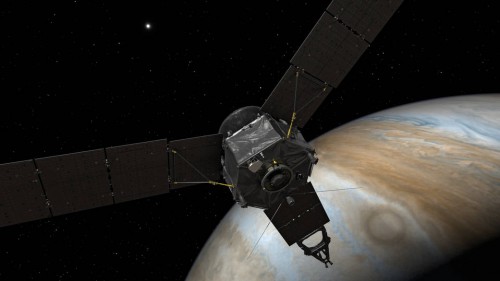 The creationists have built a big fake boat which they think will prove that the Earth is only 6000 years old. It opens to the public today.

Ham said the massive ark, based on the tale of a man who got an end-of-the-world warning from God about a massive flood, will stand as proof that the stories of the Bible are true. The group invited media and thousands of supporters for a preview Tuesday, the first glimpse inside the giant, mostly wood structure.

To the kinds of gullible people who donated to this boondoggle, it will probably be effective.

Clint Bishard of Tulsa, Okla. stood outside the ark Tuesday to see where the money he donated went. He wasn’t disappointed.

It’s about telling the true history, Bishard said. There was a supernatural creation. There was a global flood. That’s very different from what you hear in the public school system.

That’s right. It is very different from what science and a good education will tell you.

And that’s because Ken Ham is a a liar.

We have these scientists to show people that we do real observational science in the present, Ham told the Star on a recent tour of the Ark. We can show you that the science of genetics confirms the Bible’s account of kinds, not an evolutionary process. We can show from the fossil record that it confirms catastrophism consistent with the flood of Noah’s day, not slow processes over millions of years.

No, modern genetics and geology refute the claims of the creationists, and building a big theme park with fake exhibits no more proves the Bible than that Disneyland proves the existence of giant talking mice.

I am embarrassed for these benighted people. They, of course, have no shame.