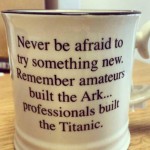 Think for a moment about the creationist’s own views of Noah’s Ark and the Flood. This was a cataclysmic event: Over a month of intense rainfall, gigantic fountains of water erupting from the deep, and in some pseudoscientific versions, a canopy of metallic hydrogen surrounding the earth exploded in an interaction with the almost pure oxygen of Earth’s atmosphere, converting 80% of that oxygen into water that deluged the planet. At the Creation “Museum”, Ken Ham imagines a wall of water hundreds of feet high crashing into the land in a kind of super-tsunami that swept all the way into the center of the continents. The Genesis Flood imagines that most major geological features were generated in this relatively brief event — the Himalayas were thrown up, the Grand Canyon gouged out. Forests were shredded, and the oceans were clotted with debris. Ham argues that there were huge floating rafts of logs and dirt adrift on the seas immediately afterwards, that were used by the survivors — those few organisms on the Ark — to drift to all the newly formed continents afterwards.

Oh, yeah, the Ark. Big wooden barge. It survived all of that chaos.

One has to wonder, then, why Ken Ham couldn’t have used 4,000 year old building techniques to assemble an indestructible floating wooden frame in his Ark Park, or how come the Dutch model of the Ark crumpled when it bumped into a boat in Oslo? 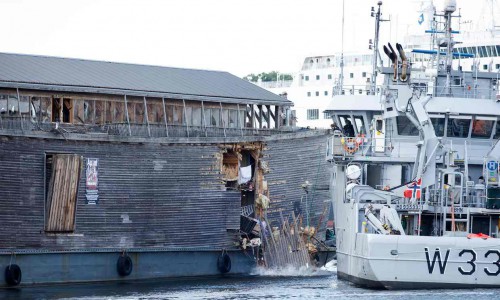 That’s the thing about creationists: they want to imagine that their all-powerful god wields immense cosmic forces and emphasize the dramatic, catastrophic power of their world-killing flood, but at the same time they can’t even comprehend the energies involved in an ocean swell.

We even have video of the collision! It’s a slow-motion bump.

Why are atheist conversion stories by Christians so damned unconvincing? » « The whole dang family is this clueless!