I agree that many “Bernie Bros” are obnoxious. I am also disappointed that Sanders has not spoken out enough against the bad behavior of some of his fans (but I’d still rather see a real progressive push back against the conservative Democrats). However, if we’re going to complain about noxious fans on one side, we also have to call out worse behavior from the anti-Bernie fanatics. Like this appalling meme. 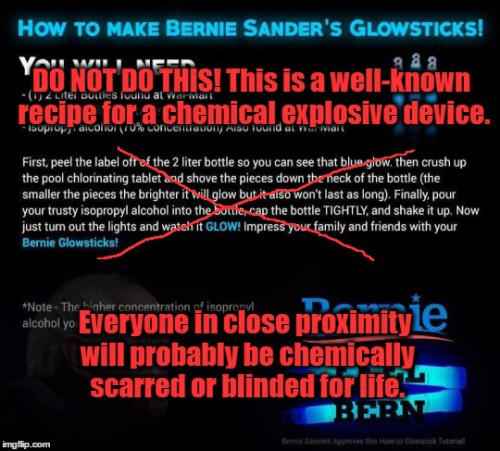 DO NOT DO THIS!

That is a recipe for a chlorine bomb, not glowsticks. It would likely kill or do lasting harm to anyone making it, and also harm anyone around them.

Here’s another recipe. Take standard partisan political fervor. Add a few amoral morons who like the trolling behavior they learned on 4chan. Mix together and watch enlightenment grow.

Oh, I didn’t mean to write “enlightenment”. I meant “stupidity”.