The Squid Scientists take a photo of their baby animals, and unwittingly reveal what they’re actually doing. 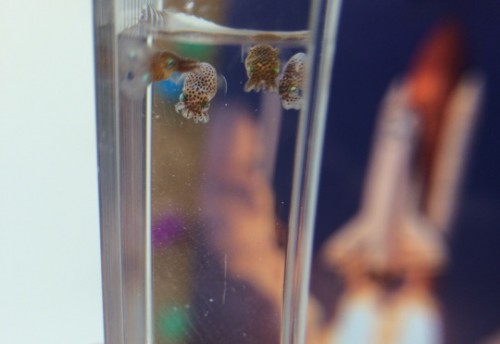 Look behind the squid — I know it’s hard, why would you want to look past cephalopods? — and what do you see? That blurry poster in the background? It’s a space shuttle launch.

And now you know. This is a top secret program to train Euprymna scolopes to pilot spacecraft. They’d probably be better at 3-dimensional thinking than us, so it’s only natural. Quick, reboot Star Trek with a more appropriate cast!

Oh, I think it’s been done–the Thermians from the Klaatu Nebula in Galaxy Quest. Man, that was a prescient movie.

The Tesla Model 3 is almost my car » « If I’m really good, in my next life I get to be a librarian