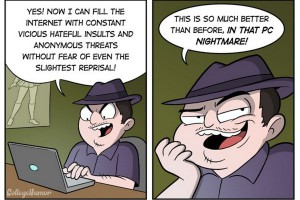 It’s become the standard trope: college students are whiny, delicate, over-sensitive wimps who can’t take the real world and demand safe spaces and trigger warnings. These complaints about students are usually made by ignorant jerks who don’t know any, and who will also be complaining about too PC and of course, the regressive Left, and before you know it, they’ve put all college folk into the cultural Marxist category. Those phrases are good tells to let you know you’re dealing with an idiot.

The latest cause célèbre for the regressive trolls is an incident at Emory University, in which someone scrawled “Trump 2016” on the sidewalk. As the right-wing twits tell it, the students were shocked and horrified and demanding protection from the administration, and the administration rushed to coddle them.

It was all a lie.

Snopes has a good breakdown of the real story. Yes, someone chalked “Trump 2016” on campus. No, students didn’t swoon and weep and scurry to hide under the bed.

While it was true that several dozen Emory University students protested in response to the Trump chalk scrawlings, we were unable to substantiate that anyone (student or administrator) offered emergency counseling, or, indeed, counseling or any sort. Neither did anyone seek counseling that we could see, and no students complained “safe spaces” were violated (though at least one said they felt “unsafe”).

The students organized a goddamn protest, which is exactly what you should do when someone starts preaching Trumpism. The lie that they were after counseling or complaining about violation of their safe spaces is bullshit that came from prestigious quality sources like The Daily Mail, Fox News, and the Drudge Report.

In nearly all such claims, details of the actual controversy were obfuscated by embellished elements framing students or schools as overly sensitive. While it was true some students of color expressed that the large number of Trump chalkings made them uneasy, most simply gathered to express their political distaste for the presidential candidate and his platforms on issues of race and religion.

If you’re one of those anti-PC kneejerk conservatives complaining about “special snowflakes” on the basis of lying right wing propaganda, I hereby condemn you to reading this article on 5 (Statistically BS) Complaints About Social Justice Issues, because you are ruining America.

You should maybe also spend some time talking to real college students, because they are generally intelligent, thoughtful adults who actually have legitimate reasons for their concerns. I won’t require it, though, because it wouldn’t be fair to them — they probably don’t want to talk to you, asshole.

The only voting guide you need for this election » « Friday Cephalopod: Sounds like high school