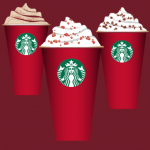 She has declared the current Starbucks holiday cup ‘controversy’ stupid.

Do not buy in to the media hype surrounding this story!! It is just another attempt by the LEFT to make Christians look stupid.

She still gets some things wrong. All of us on the “LEFT” are shocked and bemused by the fact that anyone on the “RIGHT” thinks this is a matter of any significance at all…but the original instigator, people like Joshua Feuerstein, are most definitely not part of any left-wing conspiracy.

I am also amused by one other little fact. She thinks the controversy is stupid, but…

But even Palin said that she had chosen to buy her coffee at the local Mocha Moose instead of patronizing Starbucks.

But then maybe that’s entirely because Starbucks coffee is terrible.