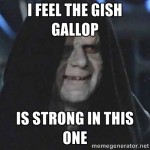 By now, everyone should have heard Ben Carson’s litany of stupidity. He’s a card-carrying member of Idiot America, and this statement is a testimonial to his lack of understanding of quite basic science concepts.

“I find the big bang, really quite fascinating. I mean, here you have all these highfalutin scientists and they’re saying it was this gigantic explosion and everything came into perfect order. Now these are the same scientists that go around touting the second law of thermodynamics, which is entropy, which says that things move toward a state of disorganization. So now you’re gonna have this big explosion and everything becomes perfectly organized and when you ask them about it they say, ‘Well we can explain this, based on probability theory because if there’s enough big explosions, over a long period of time, billions and billions of years, one of them will be the perfect explosion,” continued Carson. “So I say what you’re telling me is if I blow a hurricane through a junkyard enough times over billions and billions of years, eventually after one of those hurricanes there will be a 747 fully loaded and ready to fly. Carson added that he believed the big bang was “even more ridiculous” because there is order to the universe. “Well, I mean, it’s even more ridiculous than that ’cause our solar system, not to mention the universe outside of that, is extraordinarily well organized, to the point where we can predict 70 years away when a comet is coming,” he said. “Now that type of organization to just come out of an explosion? I mean, you want to talk about fairy tales,that is amazing.” Later, Carson said he personally believed Charles Darwin’s theory of evolution was encouraged by the devil.

Oh-my-dog, this is like the rawest, most primitive kind of creationism — it’s primordial Gish. It’s the pseudoscience of Whitcomb and Morris, from the 1960s. Carson would have wowed the rubes at the Scopes trial.

The universe does not violate the laws of thermodynamics: everything since the Big Bang represents an increase in entropy. There has not been a series of explosions, each one trying to create a functioning arrangement of matter and energy. Matter and energy interact in predictable ways, and can produce local increases in order at the expense of a net loss of order in the environment, and that is not a violation of thermodynamics — in fact, biology is dependent on thermodynamics.

And the “tornado in a junkyard assembling a 747” argument takes me back — I remember hearing it as a student of developmental biology, and wondering how the creationist thought he got here. He was a single cell, once, that sucked in thousands of grams of chemical energy and spewed out thousands of grams of CO2 and nitrogen and water, replicated itself at a rapid pace, and assembled itself in a whirl of complex activity into a battery of specialized subunits that allowed it to walk and talk, all without a guiding hand. Once you see that, it’s hard to muster much enthusiasm for denying the effectiveness of thermodynamics, or its applicability to other natural processes like evolution.

But I’ve been seeing Carson’s stupid quote all over the place, and it’s always accompanied by some expression of incredulity that a brain surgeon could be so ignorant. Stop that.

I worked my way through college as an assistant in a neurosurgery training program (among other things). I was helping medical students who wanted to specialize in being a brain doctor every day, and not a one impressed me at all with their intelligence.

There were, of course, many things that they were very good at, often much better than I was. It takes a lot of discipline and practice to be a good surgeon. They were good at memorizing procedures. They had to be decisive — a lot of bad things can happen when you’re slicing into a brain, and you better be fast and responsive and deal with crises appropriately. They have to have strong and steady hands (although their dexterity is often over-rated. When I was doing single-cell work, it put the skill of those guys going into masses of tissue with spatulas in perspective). It’s not work that just anyone can do, but you can say exactly the same thing about plumbing or carpentry or teaching. Yet somehow, surgeons have this bizarrely exalted reputation…probably because their job involves directly saving lives.

But saving lives does not require much knowledge of science — no one sees an emergency situation and then starts making hypotheses and testing them with experiments, you know, or reviewing the current literature. You want a guy who’s memorized the book and has good muscle memory and is quick. In fact, there’s no problem with being as dumb as a sack of horse poop and being a good neurosurgeon, as is amply demonstrated by people like Ben Carson and Michael Egnor. Being a neurosurgeon doesn’t preclude being knowledgeable, but clearly we have to overcome this bias of using an MD degree as a proxy for intelligence.

Fortunately, Ben Carson is working hard to demolish that preconception.