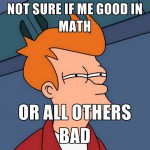 It’s been a long, long day of teaching and meetings and lab work, and sometimes it’s good to get home and discover why it’s important to teach. Like by learning what a movie star thinks about basic math, along with his history of domestic violence.

“Since I was a child of three or four,” he says, “I was always wondering, you know, why does a bubble take the shape of a ball? Why not a triangle or a square? I figured it out. If Pythagoras was here to see it, he would lose his mind. Einstein, too! Tesla!” He shakes his head at the miracle of it all, his eyes opening wide, a smile beginning to trace itself, like he’s expecting applause or an award. And all you can do is nod your head and try to follow along. He just seems so convinced that he’s right. And that he is about to change the world.

“This is the last century that our children will ever have been taught that one times one is one,” he says. “They won’t have to grow up in ignorance. Twenty years from now, they’ll know that one times one equals two. We’re about to show a new truth. The true universal math. And the proof is in these pieces. I have created the pieces that make up the motion of the universe. We work on them about 17 hours a day. She cuts and puts on the crystals. I do the main work of soldering them together. They tell the truth from within.”

After high school, he attended Pratt Institute in Brooklyn, studying chemical engineering, until he got into an argument with a professor about what one times one equals. “How can it equal one?” he said. “If one times one equals one that means that two is of no value because one times itself has no effect. One times one equals two because the square root of four is two, so what’s the square root of two? Should be one, but we’re told it’s two, and that cannot be.” This did not go over well, he says, and he soon left school. “I mean, you can’t conform when you know innately that something is wrong.”

He seems to be doing all right, despite the disgusting attitude towards women and the most useless and deranged ideas about math.

I feel sympathy for his professor, and relief that all of my students are a lot brighter than Terrence Howard.

Now I have to go to an evening meeting with a bunch of students.

The saga of Slippery Sam » « Come for the science, flee from the claustrophobic horror