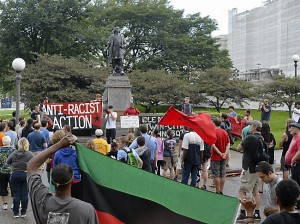 About four dozen people showed near the Judicial Building at the State Capitol complex in St. Paul to counter protest individuals who had planned on holding a rally in defense of the Confederate Flag on Saturday, September 5, 2015. The Confederate Flag rally organizer BC Johnson, who had intended to rally at the State Capitol said the event was relocated to Savage Community Park. He estimates 10 people showed up. (Pioneer Press: John Autey)

We have hateful loons here in Minnesota, too. A group calling itself the Minnesota 10,000 for Southern Heritage tried to organize a rally for the Confederate flag in the state capitol today. It turns out the 10,000 was a wee bit optimistic.

They applied for a permit to hold their rally, and had to estimate how many would attend: they guessed…25.

The rally was held this morning. A counter-demonstration was scheduled that brought in about 50 people, and when they heard about it, the chickenpoops waving the traitor’s flag ran away and held their rally in a park, instead.

About 10 people showed up.

I think they need to change their name to the Minnesota 10 for Southern Heritage.

Too true » « “cow’s colostrum mixed with your own blood”