Hey, how about these article titles?

We’re getting this sudden flurry of articles touting the contribution of organic molecules from cometary sources to the origin of life on Earth. They’re all bullshit. The media hype machine is going crazy again over science the journalists haven’t thought through.

There’s nothing wrong with the core of the original paper that sparked this frenzy of nonsense: the investigators showed that the energy of comet collisions can drive the assembly of amino acid monomers into short linear peptides. They made extremely cold pellets of glycine ice and fired them with a propellant gun into a block, and presto, they got tripeptides out of the collisions. I can believe that.

What I can’t believe is that early cellular biosynthesis was catalyzed by comet impacts. This explains nothing. It is not enough to postulate that there was, once upon a time, a cold soup of organic subunits in the ocean, that just sort of congealed into life — it doesn’t work. The authors made no calculations about the concentrations of their tripeptides in the prebiotic ocean (it would have been an exceedingly thin, dilute soup), don’t consider that these compounds were probably degrading as fast as comet-smashing was making them, and that their mechanism does not say anything at all about what reactions early precursors to life would have been using to synthesize peptides. I’m certain the answer didn’t involve waiting for a giant ball of ice to smack into the protocell.

For some reason, journalists and the public love these scenarios of cosmic forces colliding in big explosions to create life — it’s as if they desperately want Michael Bay to be in charge of biology. It’s not how it would have worked. If you want to look for answers to the origin of life, you need to look at conditions that generate a gentler flux of energy that is a better analog to metabolism. It’s about flow, not bang.

The best summary of how actually abiogenesis would have occurred is Nick Lane’s The Vital Question: Energy, Evolution, and the Origins of Complex Life

. You know how crimes can be solved if you use the principle of Follow the Money? Life can be understood if you try to Follow the Electrons. It makes no sense to look for life’s beginnings in cataclysmic collisions, you need to search for gradients and reactions with energies that wouldn’t disintegrate cells.

Or you could try reading a paper by the always-entertaining William Martin, if you’re in more of a hurry.

The very familiar concept that life arose from some kind of organic soup is 80 years old and had best be abandoned altogether. The reason is that life is not about the spatial reorganization of preexisting components, it is a continuous chemical reaction, an energy-releasing reaction, and a far-from-equilibrium process. The proposal that life arose through the self-organisation of preformed constituents in a pond or an ice-pore containing some kind of preformed prebiotic broth can be rejected with a simple thought experiment: If we were to take a living organism and homogenize it so as to destroy the cellular structure but leave the molecules intact, then put that perfect organic soup into a container and wait for any amount of time, would any form of life ever arise from it de novo? The answer is no, and the reason is because the carbon, nitrogen, oxygen, and hydrogen in that soup is at equilibrium: it has virtually no redox potential to react further so as to provide electron transfers and chemical energy that are the currency and fabric of life.

If not soup, what? Life is about redox chemistry, so the site and environment of life’s origin should be replete with redox reactions. Alkaline hydrothermal vents provide a good model for understanding early chemical evolution because they have some similarity to living systems themselves. Perhaps similar to some types of hydrothermal vents observable today, such as Lost City, alkaline vents during the Hadean would have offered a necessary and sufficient redox potential (in the form of the H2-CO2 redox couple) and catalytic capabilities (in the form of transition metal ions) to permit organic synthesis at a specific location in space and stably over geological time to give rise to the chemical constituents of life and to foster the transition from geochemically contained chemical networks to bona fide free-living cells. Why, exactly, are alkaline hydrothermal vents conceptually attractive in the origin of life context? There are a number of reasons, many of which are old as the discovery of vents themselves but they remain current. 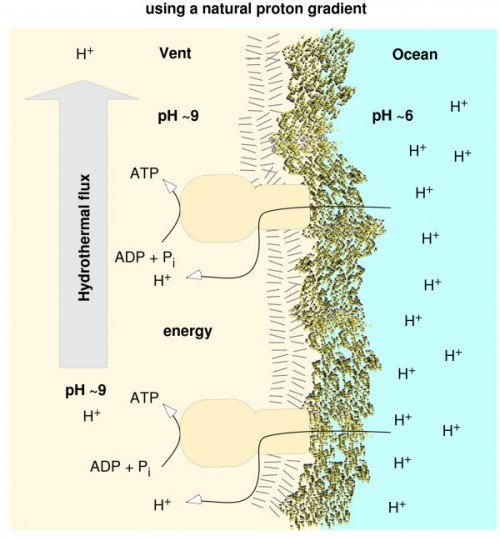 These ideas have been around for years, but they never seem to get the kind of press extraterrestrial bullshit gets. It’s the lack of explosions, I suspect.