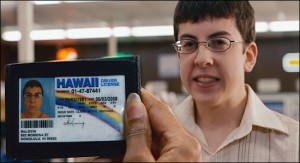 Creationists (and poes), it doesn’t help the conversation at all when you pretend to believe something you do not — your complete lack of understanding of the others’ positions makes your sham obvious from the very onset.

For example, I got this request from an “atheist” to help spread a rational understanding of the universe…like this.

The universe did not originate out of “nothingness” via some stupidly insane Big-Bang theory ! For pity sake, even a moron knows that “nothingness” cannot experience a bang. And so what’s reality ? What’s the alternative ? Well look closely and please think deeply. Pure Logic is the alternative, it’s very very simple;

The universe has “always existed” . . . Period.

The evolution of TIME is what deceives us

into thinking the universe must need a beginning.

That’s from a site called Big Bang No No No, and I think you can tell it’s not really an atheist web page — it’s a feeble attempt to repudiate physics. Oh, and also to bilk money out of strangers.

We are in a new era of atheism and need to unite this world. We can’t be presenting ourselves as buffoons to the religious world. We’re asking you for a puny $ 5 to assist us in spreading this HISTORIC awakening. 3 months from now you certainly won’t be hurting that you gave 5 dollars, so why hesitate ? Or ?

Please don’t allow the ” I’m losing something ” illusion to keep you from helping us educate the world. Atheists are not lone warriors. We’re in this together. We’re in a war against false religions. Please think logically and hit this Donate button. The Big-Bang is as juvenile as the easter bunny. We need help to educate Atheists.

Riiiiight. That’s about as honest as the Center for Medical Progress…which, by the way, Amanda Marcotte will be tearing apart on Atheist Talk Radio tomorrow morning.

I think these people do such a poor job of faking science and atheism because they really don’t understand them at all. And if they did, they’d be atheists and would promote science.