Isn’t that a terrifically click-baity title? I should just stop here while I’m hot.

The Jade Helm 15 exercise is in full swing, and the paranoid right-wingers in Texas are sitting in their bunkers, fondling their guns. Alas for them — they have no idea of the magnitude of the horror that awaits them. 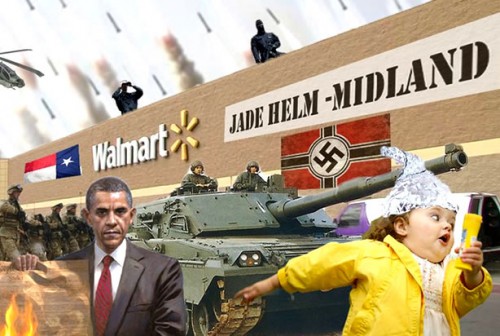 A GIGANTIC asteroid will smash into the earth this September, causing mankind to die out in a dinosaur-style mass extinction, conspiracy theorists are warning.

You had no idea, either, did you? You haven’t been following the right sources.

Internet bloggers and Armageddon conspiracists are predicting the “end of days” event to happen between September 22 to 28.

Oh, well then, Internet bloggers said it, I guess that means it’s true. Unfortunately, this article keeps mentioning “bloggers” in the same way a more prestigious paper would mention “unnamed sources at the Pentagon”, but doesn’t bother to link to any. I guess we’re now just a class of authorities that requires no further specification.

One blogger has worryingly suggested US residents retain their firearms after suggesting that the controversial military operation Jade Helm taking place between July and September in several southern states is in preparation for predicted anarchy that could ensue as the asteroid nears the planet.

Meanwhile, many fringe religious groups and Biblical theorists are claiming the predicted impact will herald the beginning of the Rapture – a seven-year tribulation period.

It just goes on and on about all these ludicrous apocalyptic theories, and it completely misses the most important one. The date for this exercise was chosen because this is when the stars are in alignment, and lost R’Lyeh shall rise, and the great god Cthulhu will at last consume us all.

A blogger said it, so you can believe it.

Reddit gets kicked around some more » « The ear of David Brooks