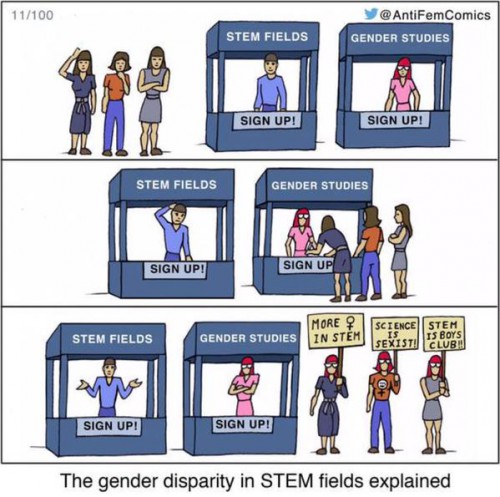 The cartoonist might want to consider reading Nature magazine today.

The problem is worth, once again, stating clearly. In the United States and Europe, around half of those who gain doctoral degrees in science and engineering are women — but barely one-fifth of full professors are women. Women are not invited in significant numbers to sit on the scientific advisory boards of start-up companies. A scientific conference at which half of the keynote speakers are women stands out simply because of that.

The challenge and the consequences of the lack of women in research — especially at senior levels — are expressed in many ways, with worrying persistence. Evidence suggests that too many women encounter patronizing attitudes or harassment in research contexts — whether at work, at academic conferences or in the field. Recent evidence, such as studies of mock hiring exercises, and analysis of grant success rates, authorship assignment and citation counts, suggests that discrimination against women runs deep in the psyches of both genders.

So much for the notion that it’s a bunch of social sciences women whining about sour grapes.

And, by the way, can we please abandon this bias that the social sciences are somehow inferior to the ‘hard’ sciences? My wife has a psychology Ph.D., and there are things she knows that I don’t and vice versa.