Yet again, another defender of Islam hangs the truth of his holy book on the scientific accuracy of the text. It’s amazing how defensive these fundies get over the possibility that the author was merely transmitting the guesswork of the time, and like any scientific hypothesis, stands a risk of being shown to be wrong by later work.

In this case, the apologists are confronted with a verse from the Quran, which they happily translate literally as (Man is) created from gushing water (which) comes out from between the backbone and the ribs. I think the Arabs of the 7th century knew exactly where the spine and ribs are — you don’t need to chop a corpse open to find them — and saying that something was located between the spine and the ribs is clearly equivalent to saying the source of semen is in the chest. Which is wrong. Obviously wrong. And they know it is wrong. But watch as they spend 8 tortuous minutes explaining that it’s not really wrong, and all those old Greeks really got it wrong, anyway, unlike Mohammed.

You don’t want to watch that tedious video, I know, so I’ve pulled out a few key frames.

First, here is where they state the premise of their argument: it is implied that this literal translation of a verse of the Quran is correct, and that it is true that semen is found between the backbone and the ribs prior to ejaculation. 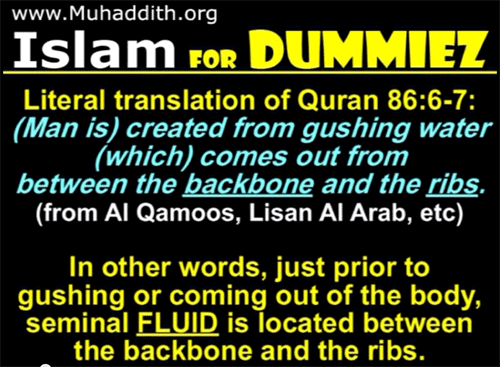 They then show us an accurate mid-sagittal section through the human body, showing the location of the prostate, the seminal vesicle, and the various ducts (it’s cute that they’ve blacked out the penis — you can show a cartoon of the interior of a colon, but that dangly bit is just too much). They even circle the main sources of seminal fluid, and they’re all clearly down around the pelvic floor, between the coccyx and the pubic bone. No ribs or spine are even in the diagram. So what do they do? They draw two black lines, one in front which they label “ribs”, and one in back which they label “spine”, and announce, look, the prostate is between the ribs and spine! 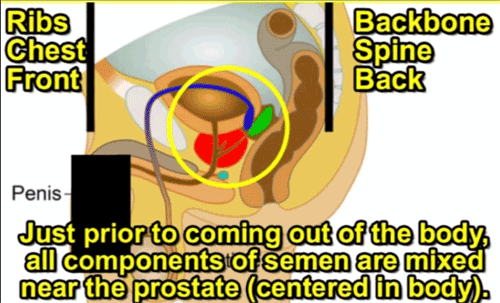 No. Just no. I assert that Mohammed knew full well where the spine and ribs were, and also knew confidently where the pelvis was located, and that if he actually had divine knowledge of what the prostate did and where it was located, he would not have been at all confused about whether the prostate was best described as resting in the chest or the hips. The only reasonable conclusion is that he had no idea of the source of semen, and was communicating the guesses of other scholars.

But wait! They have an answer for this! 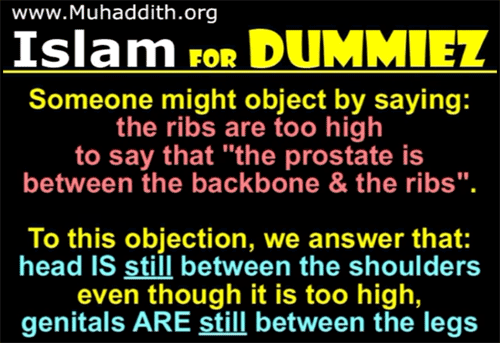 That’s really reaching. They’re claiming that the text is scientifically accurate, but are also trying to justify a half-meter error in the location of an organ by appealing to colloquial usage. You don’t get to have it both ways. I might as well be able to claim that calling Muslim fundamentalists “dickheads” is scientifically accurate, because their heads face the front of their bodies, just like their penises, even though it is too high.

The rest of the video is sneering at Hippocrates, who got many things wrong about biology, unlike Mohammed, who never made a mistake, therefore this misinformation couldn’t possibly have come from ancient Greek sources.

Except that it did. The Greek hypothesis about reproduction was that it involved pangenesis, that is, the gathering of material from all over the body that was transported to the gonads and assembled into a miniature human being — that babies had fingers because little bits of finger stuff came from the parents’ fingers, they had hearts because essence of heart was drawn into the testicles, that a little tiny bit of Daddy’s eye went into the homonculus assembly area. The Quran, which is not a science textbook, transmitted a poetically rendered brief summary of this common idea, and that’s why it doesn’t mention the prostate, the epididymus, the Wolffian ducts, or any of the details an anatomist or embryologist would know.

At least they got one thing right. Islam is for dummiez.

Nobody is actually a “none” » « It’s Superbowl Sunday!