Uh-oh. The Pope has just grossly insulted my beliefs.

I also believe that violence is never the answer, and that the proper response to words is more words, not flinging punches.

But look at what this pope is saying, violating what I hold dear. 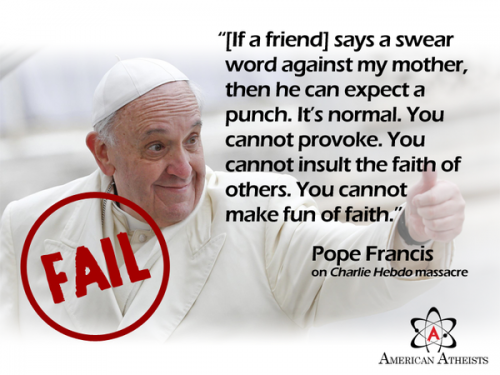 By his own principles, I guess if ever, in some catastrophic, ugly, unpleasant stroke of bad fortune, I were to meet the pope, I’d have to punch him for provoking me.

Wait. No. Fuck the pope. I’m going to reject his principles and refuse to punch him.

I might have to say something about his mother, though — like that she seems to have raised him with a kind of stupidly pugilistic morality. Or was it his church that screwed him up?