William Saletan takes a look at this chart and says creationism isn’t as bad as it could be; I look at it and see no good news, no consolation, at all. 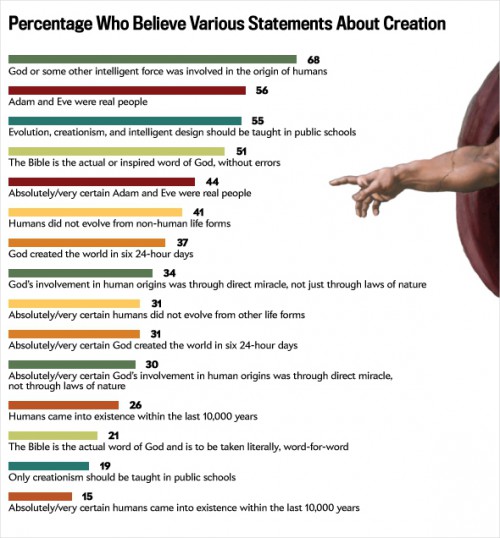 If you look way down at the bottom of the chart, you can persuade yourself that creationism is really a fringe idea.

Ask whether humans have been around for only 10,000 years, and the hardcore—those who are absolutely or very certain on all five questions—shrinks to 7 percent.

Yes, we’re a creationist country. But apparently, we’re pretty creative about what that means.

Yes, let’s just ignore the top 9/10ths of the chart, and everything looks hunky-dory!

Unfortunately, there’s a problem: every single statement in that chart is wrong, absolutely and demonstrably, and the people have no valid evidence for any of them, or are even aware of the sectarian religious dogma that generates those positions; the idea that God or some other intelligent force was involved in the origin of humans is no less wrong than humans came into existence in the last 10,000 years. When over half the population believe that creationism and intelligent design ought to be taught in the public schools, we’re no longer dealing with a few freaks on the edge — that’s mainstream.

We wouldn’t announce that a crisis in math education has been averted if we’re able to walk kids through solving 2+2 correctly, but they’re still stumped by 3+3. But somehow we’re supposed to be reassured if the number of people who think Adam and Eve were real has dropped below 50%.

The inverted ethics of the internet » « Just so you know