I just learned that the Blogess has “giant squid phobia”. 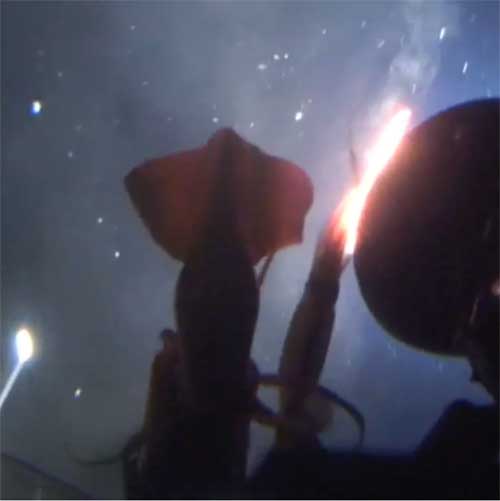 Several people are aware of my severe giant squid phobia and lovingly (?) sent me this video of a giant squid attacking a Greenpeace submarine, and that’s unsettling enough, but WHY IS THERE ANOTHER SQUID BEHIND IT SPITTING OUT FIRE?  Is that a real thing?  Because I was scared enough without adding: “Oh, and also they can shoot a blinding inferno out of their butts like a tentacled, aquatic bonfire.”  It’s like half giant squid and half underwater maritime flame-thrower, and that’s not natural and is a sign that all giant squid are literally demons from the depths of hell.

This is just sad. If ever we were to meet, now I’d just have to turn my head aside, perhaps shield my eyes, and otherwise spurn all the normal conventions of civil social intercourse.

The video isn’t even all that — it’s a few seconds of flailing tentacles, the ‘fire’ is just a reflection of a bright light. I call that an excerpt of a normal Saturday night at the Myers house.

Jesus Christ, we have an “Ebola Czar” » « This annoys me