A company that makes drill bits for fracking is painting them Susan G. Komen Pink — that specific intense shade that has become fixed in the public eye as the color of breast cancer research. Note, though, that this is entirely an initiative by the drill bit company, and there doesn’t seem to be a specific partnership, and the company doesn’t seem to be donating any money to breast cancer research, but are just painting all their bits a different color than usual, and tossing in a breast cancer pamphlet. 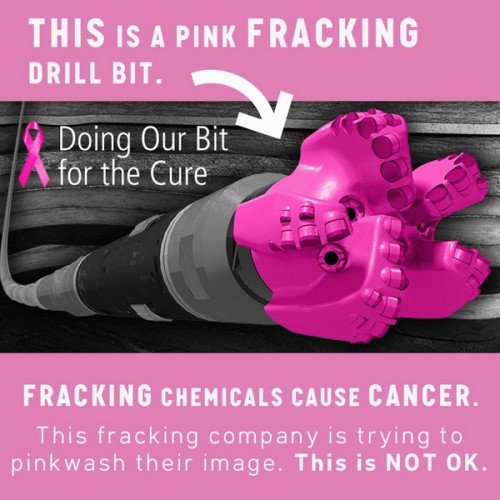 This is a classic example of pinkwashing. The company isn’t doing anything substantial to help research, but are just slapping a coat of paint on their product — and even there it’s nothing different, apparently they painted them gold before, and are now simply swapping colors. This is also a company that from some of the most environmentally damaging activities ever, fracking, an activity that makes extensive use of carcinogens. I’m having a hard time imagining a more superficial and less self-serving way to try and improve your public image.

I read the Morris North Star, so you don’t have to » « Ben Affleck, you are not helping