There’s a meme going around the anti-feminist loons, and like their most popular memes, it makes no sense at all. 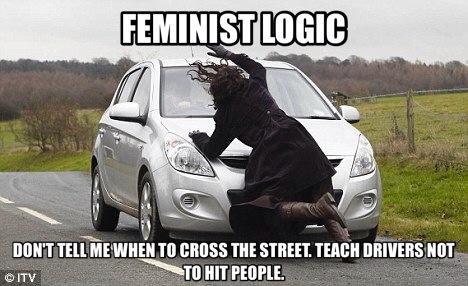 But…but…we do teach drivers not to hit people. I had driver’s ed way back in high school, but it can’t have changed much: they taught us this thing called “defensive driving”, in which we were supposed to recognize that we were tooling around in a dangerous hunk of metal at high speed, and that we needed to watch for dangerous situations before we got into them; that we were supposed to be responsible for what we did with our car; and there were lots of useful tips, like to never ever drive when your judgment was impaired, as, for instance, when you’d been drinking. They also showed us terrible graphic videos of the consequences of reckless driving.

My kids went through it several years ago, and it was pretty much the same story — be responsible, be careful, take this business seriously, and by agreeing to drive, you basically agree to the risks and consequences. It was drilled into us that you, the driver of a ton of steel, had safety obligations that were far greater than those of pedestrians, too — didn’t you ever get the lesson about the ball rolling into the street, and that you were supposed to know as a driver that you must be able to predict that there might be a child following behind?

There might be some modern differences. I guess nowadays the instructor yells at you about the stupidity of texting while driving; we didn’t have that concern in the 1970s.

Of course, the analogy also fails in some places. Never, in the history of humanity, has a man been at risk of a woman leaping out of the bushes and accidentally impaling herself on his onrushing erect penis.

Make yourself useful, minions! » « A fish, a rabbit — same thing, to a creationist