There are questions which do nothing but reveal the depth of misconceptions and breadth of ignorance of the questioner. I suppose that’s useful; it tells you the dimensions of the hole you need to fill in. Unfortunately, sometimes that hole is also filled with malice, and the questions will tell you that, too.

Aron Ra got challenged to answer 7 questions about feminism. From my opening paragraph, you can tell these are probably going to be really stupid questions, and they are. These are painfully bad. You can also tell from the way they are set up that the person has a huge load of prejudice against feminists, and what he’s really looking for is a set of excuses to dismiss feminism altogether, because he already knows he doesn’t like it.

And of course, he asks his stupid questions in the form of a youtube video, because that’s where you can find prime idiots to feed him his desired responses. Only he got Aron Ra.

You may not want to waste your time watching it — it’s meandering babble. Aron pulled out the core questions, and it’s doing the creator no favor to listen to the video and hear him slather on thick layers of Scottish-accented shit around some dumb questions.

For those of you who just can’t bear to listen to the whole thing, the 7 questions, as extracted by Aron Ra, are copied below. I also include Aron’s answers, because I disagree with some of them, a bit.

1. Who is the current leader of the feminist movement?

Answer: There is no single leader anymore. The last recognized leader was Gloria Steinem, who founded the Ms. Foundation for Women, http://forwomen.org/. But it is no longer centralized. The movement has grown such that there are other leading voices too, including Greta Christina for example.

No, Gloria Steinem was not the uncontested leader of feminism, ever. She was prominent, sure, and still is, but there were a lot of contemporary women who were looked up to: Germaine Greer, Bella Abzug, Betty Friedan, Barbara Jordan, etc. Even at the turn of the last century when feminists were fighting for the vote, there was the National Woman Suffrage Association and the American Woman Suffrage Association. As you might expect from a grass-roots movement, it has always been diverse.

But the questions is absurd. Who is the current Absolute Leader of Scotland, who I can turn to to determine what the correct answer is on the upcoming vote for Scottish Independence? Who is the current Pope of Atheism, who decrees what all atheists believe (I’m voting for Dan Barker, at the Avignon of Madison, Wisconsin, but some seem to think it’s Dave Silverman, operating out of the Rome of New Jersey. But New Jersey? Come on.) Who is the Maximum Leader of evolution, who determines what all the correct answers are?

It’s a very authoritarian kind of question, from someone who is clearly uncomfortable with the idea that there can be an egalitarian movement without a hierarchy and without a person occupying the pinnacle of the pyramid.

2. Where can I go to find an official detailed list of the goals of feminism.

Answer: I suppose the organization I just mentioned could serve to answer this question, but then a quick look at Wikipedia would do that too. http://en.wikipedia.org/wiki/Feminism

The wikipedia article isn’t a bad start. At least it makes it clear that there are diverse elements within feminism. But again, stupid question — it’s like asking for the Atheist Bible. Quit trying to shoehorn ideas into your preconceptions!

3. What is the difference between a feminist and an egalitarian?

Answer: The difference between feminism and egalitarianism is that feminism is a position on gender equality, while egalitarianism is an attempt to level both social and economic status, and even suggests the redistribution of wealth to achieve that goal. So by one definition, egalitarian is indistinguishable from communism. http://en.wikipedia.org/wiki/Egalitarianism

Meh. I consider myself an egalitarian — I simply don’t accept that we can have privileged classes of people. Communism is ideally egalitarian, but that doesn’t mean the terms are synonymous.

My answer to this one is that feminists are egalitarian, but what they’re doing is focusing on one pressing issue. This is reasonable and necessary. So while a feminist can be entirely for racial equality, for instance, they can also recognize that women have a unique subset of concerns that differ from the unique subset of concerns that black Americans may have. It does no one any favors to consolidate their cause under a more general umbrella — it means that their particular concerns get diluted. Multiple problems, multiple approaches. I guess this is another idea authoritarians can’t comprehend.

Why not ignore atheism and science, and instead of having dedicated proponents for each separately, instead sweep all of it into the bin of Rationalism? Easy. Hey, while we’re at it, let’s just forgo all those different directions people take, and instead just fight for Good Things. We can all be GoodThingists together, and solve all of society’s problems at once!

Answer: Real feminism is the belief that unfair double-standards should not be applied on the basis of gender. Obviously then, women who claim to be feminists yet who demand special advantages over men have excluded themselves from the proper application of the only definition that word has ever had. https://www.google.com/search?q=feminism&ie=utf-8…

Anyone can call themselves a feminist. Anyone can call themselves egalitarian, too; white supremacists like to declare that they aren’t against black people, they just want them to live the lives of happiness and contentment to which their brains have been adapted, which apparently means servility and manual labor. I get creationists telling me all the time that they are True Scientists, because they examine all of the possibilities with an open mind (which is not scientific at all, since we have to rank hypotheses all the time).

My definition of a feminist is someone who recognizes the inequities towards women of the present system, and argues for changing the status quo. Someone who claims to be a feminist and then denies that there is any discrimination, or claims that the current system gives nothing but advantages to women, is not a good feminist. I’d also suggest that someone who, in the name of feminism, spends all their time fighting against other feminists rather than against the social ills that beset women, is probably not a good feminist.

5. What have you actively done in the name of feminism?

Answer: The questioner wrongly assumes that being a feminist means that one is also an activist. It doesn’t. Fortunately I am an activist as well, so I have written several blog posts in support of the feminist ideal, and have endured a constant bombardment from the anti-feminist hate groups because of it. I have also rallied and campaigned for feminist causes going on at the state capitol and will continue to do so when I am able. However I am primarily an anti-theist and an advocate of science education. That’s what I’m good at, and that is where I choose to direct my attention.

Anti-feminism is a state of mind that implements legal and social challenges to women. I oppose that. I try to change people’s minds and wake them up to the unfairness of the system. I support organizations like the AWIS; I’m an advocate for women in science and education.

Again, I suspect an authoritarian mindset at work. We’re trying to persuade and educate; some people seem to think that unless it involves heavy machinery, armored footwear, and sweat-drenched muscles rippling, it ain’t real.

6. Does feminism benefit men? If so give one such example.

Answer: Yes, feminism benefits men. My personal favorite example is that in the late 1980s, the state of Texas still always defaulted on the mother’s behalf in every child custody case -except when the mother could be proven to be unfit. Several law offices reported that they would not take the case of a man attempting to file for custody for that reason. But these offices also remarked about the feminist protests going on at that time, opposing the stereotype that women were the housekeepers and men were the breadwinners. Their protest successfully changed legal policy in this state such that only a few years later, all such cases would default to joint custody -except again for instances where either parent could be declared unfit. As a result, men can now have primary custody and receive child support from the mother based on a fair comparison of circumstances without regard to gender. This is a clear example of something that was done for men without any special benefit to women. So I get bonus points for that.

Oh, hell yes. Feminists are demanding that no one should be locked into narrow gender roles. Men and boys should be liberated from the tyranny of a rigid masculinity, too. Be who you are, without society telling you that you can’t.

7. How come I am nowhere to be found when bad feminists are giving feminism a bad name?

Answer: I’m only on the mailing lists of good respectable groups. I have attended several events with prominent people in the feminism movement, but those radical feminazis were nowhere to be found, and I have yet to meet one. Such people are not part of the mainstream movement, so I only ever hear about them long after the fact, if at all.

This was the part of the Scottish idiot’s rant that I found most offensive and most revealing. He gives a specific example of bad feminists: those women who participate in slut walks. His example of ‘bad feminism’ is women who led campaigns that declared that rather than telling women how to avoid getting raped, we ought to tell men to not rape. That’s offensive, he says. He wants good feminists to tell those offensive women to shut up. It’s horrible to tell men that they are potential rapists.It’s “utterly fucking disgusting” that these “not-real-feminists” are walking around with placards telling men to take responsibility for their actions and the actions of other men, yet he’s going to yell at women that they have to take responsibility for signs that he doesn’t like.

Here’s my short answer to that: fuck off, wanker. One thing feminism isn’t about is pandering to the delusions of anti-feminists.

He’s dishonest. He’s not looking to understand feminism — he’s looking for affirmation of his biases. And man, he’s a chattering shitload of bigotry: I took a look at his channel, and it’s nothing but whining at caricatures of feminists. Why is he pretending to ask sincere questions now, when he’s got at least 4 years worth of lazy ranting and raving collected on his own channel? 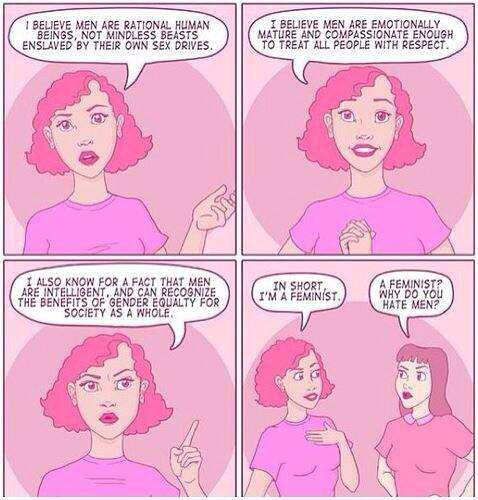 Vox Day, Scientist » « Mary’s Monday Metazoan: How can you not love an extravagant worm?