I spent quite a few hours today in the Sheldonian — an utterly beautiful building, a masterpiece of 17th century architecture designed by Christopher Wren, and clearly built in an age before anyone had ever heard of ergonomics. 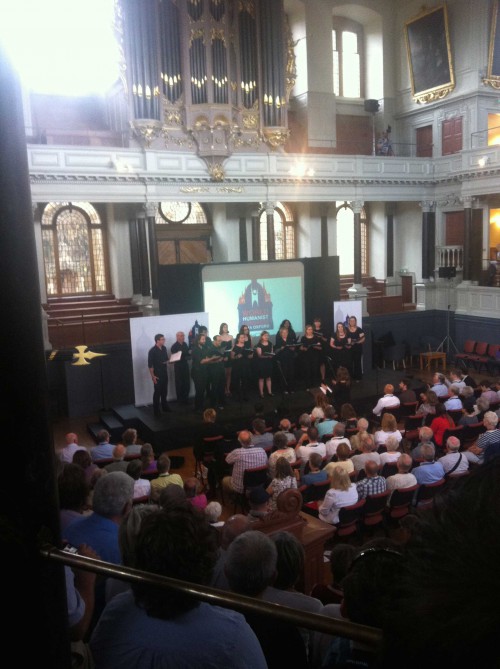 This morning I got to hear Gululai Ismail, Asif Mohiuddin, and Agnes Ojera talk about how atheists are oppressed in Pakistan, Bangladesh, and Uganda. Then this afternoon I came back to listen to Philip Pullman talk about writing. And let me tell you, it was worth it, but all that time on hard flat benches with straight backs or no backs at all, less legroom than on the cheapest airline ever, and narrow little spaces that weren’t quite wide enough to accommodate modern feet (17th century students must have tottered about on tiny little pegs rather than real feet), mean I’m now feeling a bit wrenched and sore.

Most of the panel discussions were held in the Examination Schools with rather significantly more modern seating, and there I listened to Babu Gogineni, Leo Igwe, Valentin Abgottspon, and Bob Churchill talk some more about oppression and efforts to fight it, and then a spectacularly fiery conversation between Alom Shaha, Maryam Namazie, Maajid Nawaz, Kenan Malik and Jim Al-Khalili on the topic of Islam. Islam is very complicated, did you know that?

The rest of the evening was spent socializing, hanging out with Norwegians, I broke down and had a beer, and had a delicious dinner in which I was deeply offended as an American by being seated directly under a gigantic portrait of George III. Then more socializing. And a bit more.

By the way, Gululai Ismail was awarded Humanist of the Year. Well deserved!

Now sleep. I see on the schedule I’m expected to show up at the Sheldonian again first thing in the morning…I may just have to pass on that.

Are you a good witch, or a bad witch? » « The god of vapor is hardly any kind of god at all