I really like Richard Dawkins, personally and professionally, although a lot of readers here get indignant at that. But that’s why it hurts to see him say obnoxious things on Twitter, like rating different kinds of rape and pedophilia. He doesn’t understand why that’s objectionable; has he ever heard of Todd Akin (maybe not — he is an obscure American politician who made up a lot of nonsense about “legitimate rape” and got flambéed for it)? This is like walking straight into a firepit that has consumed many far-right wingnuts (which Dawkins is not) before him, and thinking he’ll come out unsinged.

Amanda Marcotte does an excellent job of explaining why his remarks were objectionable. That feminists think a patronizing pat on the ass deserves a lesser punishment than rape is simply not an issue; we don’t need condescending explanations of basic logic to understand the concept. The problem is people who don’t understand that logic at all, and think there’s a sharp cliff, an all-or-nothing pattern, so that rape gets you put in jail, while date rape gets you a high-five in the locker room. And those people aren’t feminists.

If you want to make a difference in social attitudes, you can say “Date rape is bad”…full stop. You don’t go on and say that some other form of rape is worse, because that’s all the date-rapers see: “Richard Dawkins says I’m not as bad as a rapist”. The first part is ignored.

Better still: I believe in a proportional response to a crime, and therefore someone who commits date rape should not go unpunished.

Maybe this will get through to him. 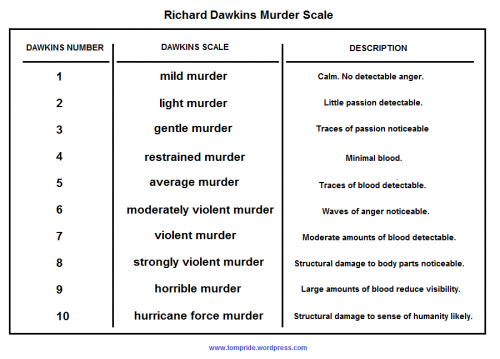 AtheistTV gets a thumbs up » « Note to self: Avoid scheduling layovers in Arizona