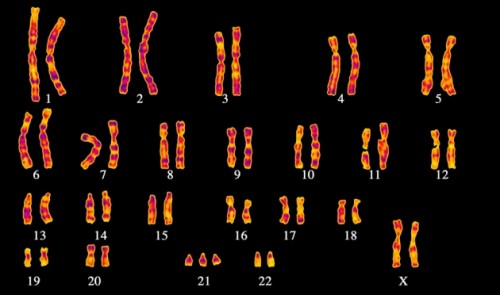 I had known that Jérôme Lejeune was the fellow who had discovered that Down Syndrome was caused by trisomy of chromosome 21, but it seems there were many other things about him I had not known — he was just a name. But there were a few things that set me aback.

Lejeune became not just a renowned researcher but the darling of the French Catholic right-to-life movement.  You can read long flattering Wikipedia biographies in both French and English. He was showered with awards and given a prestigious Chair of Human Genetics at the Paris School of Medicine, bypassing the usual competition.

When prenatal diagnosis became available Lejeune campaigned against it on religious grounds. He became a friend of Pope John Paul II and was appointed President of the Pontifical Academy for Life (Wikipedia), the Catholic think-tank for medical ethics.  He died in 1994.  The Fondation Jerome-Lejeune was established in his honour; there’s an American branch too.  This foundation provides funds for research into Down syndrome and support for families and patients, but only in the context of very strong opposition to abortion.  They’re also campaigning to have Lejeune beatified by the Vatican.

Uh, OK. Ick. One of those Catholics. I am entertained by the thought that if you do good science and happen to be Catholic, though, the church will try to get you beatified.

But then I learned something that really kind of pisses me off. He’s not the guy who discovered trisomy 21. He’s the guy who stole credit for discovering trisomy 21 (sleazy behavior like that may have just fast-tracked him to Catholic sainthood now).

The real discoverer was a woman, Marthe Gautier, who had done all the cell work that led to the identification of the chromosome abnormalities. She got a bit of space and some rudimentary equipment, and cultured cells using serum derived from her own blood. Man, we’ve got it easy nowadays.

For this work she was given a disused laboratory with a fridge, a centrifuge, and a poor quality microscope, but no funding. And of course she still had her other responsibilities. But she was keen and resourceful, so she took out a personal loan to buy glassware, kept a live cockerel as a source of serum, and used her own blood when she needed human serum.

So she set up normal human cells, prepped them for the chromosome squashes, grew Down syndrome cells and did likewise, and was held up by her primitive gear at that point…when Jérôme Lejeune showed up and whisked all of her data away to get it photographed. And then went off to a conference where he announced that he had discovered the cause of Down syndrome, and then published the story with Gautier’s name as a middle author — a paper she did not get to see and knew nothing about until the day before publication.

Lejeune is dead now, but the sleaze continues in his name. There was to be an award ceremony for Gautier — she’s 88 now — at the French Federation of Human Genetics’ (FFGH) seventh biennial congress on human and medical genetics in Bordeaux. Guess who is trying to intimidate the attendees by having a bailiff sent to film the proceedings? Fondation Jérôme Lejeune, of course, because Gautier was intending to give a speech that would affect the memory of Pr. Jérôme Lejeune. I think his foundation is doing a fine job of that already.

It’s very nice that Lejeune at least gave credit to Gautier in the authorship of the original paper, but if you browse the Foundation web page, you discover that (in the creepy mix of pro-Catholic and anti-abortion sentiment mingled with worthy appeals for care and tolerance for Down syndrome people), they repeatedly state that Lejeune is the “discoverer of Down syndrome” — so much so that it’s clear that they attach a great deal of importance on the identity of the discoverer. They don’t seem to attach much importance to the fact that he appropriated the hard work of a woman laboring away under primitive conditions, and do think it very important that she be denied recognition. Lejeune also thought the discovery was worthy of a Nobel prize (no, he didn’t get one), so…Very Big Deal. But not big enough to demand honesty and integrity in its appreciation of who did the work.

By the way, you should read the Lejeune Foundation’s excuses. They are intrinsically horrible. They ask who profits from the dispute, and the answer is…anti-Catholic terrorists.

Is this an attempt at proving that Jérôme lejeune surely can’t have made a major scientific discovery, as he is opposed to abortion and is considered as an “intransigent catholic” (horresco referens)?

This ideological terrorism, currently very popular but whose origin is easily traceable, does not come as a surprise to anyone. The Foundation and the Pr. Lejeune will handle the matter the way it deserves to be handled.

Popular but…easily traceable? handle the matter the way it deserves to be handled? Paranoid persecution complex much?

Also, Gautier is an old woman and her claims are late and not trustworthy.

It’s got to be some kind of metaphor for something » « Who?