US schools are weird places where athletes, not scholars, are the stars — it was that way when I was growing up, it’s that way now. High schools spend huge sums of money on sports, and colleges are on their way to becoming professional sports franchises instead of institutions of learning (I was shocked in the grocery store yesterday to see Time’s cover story: It’s time to pay college athletes”. No, it’s not.) It erodes the purpose of education and skews priorities…and too often, the coach is the highest paid employee, and when they also acquire cult status, abuses follow. Think Penn State. Now go take a shower.

This story in the Atlantic, The Case Against High School Sports, starts off dismally, describing the sorry and familiar state of high schools across the country, where more money is spent on football than math. And just to make it even worse, we get a brief history lesson: would you believe our emphasis on sports is rooted in racism and Christianity? Of course you would.

At the time [1900s], the United States was starting to educate its children for more years than most other countries, even while admitting a surge of immigrants. The ruling elite feared that all this schooling would make Anglo-Saxon boys soft and weak, in contrast to their brawny, newly immigrated peers. Oliver Wendell Holmes Sr. warned that cities were being overrun with “stiff-jointed, soft-muscled, paste-complexioned youth.”

Sports, the thinking went, would both protect boys’ masculinity and distract them from vices like gambling and prostitution. “Muscular Christianity,” fashionable during the Victorian era, prescribed sports as a sort of moral vaccine against the tumult of rapid economic growth. “In life, as in a foot-ball game,” Theodore Roosevelt wrote in an essay on “The American Boy” in 1900, “the principle to follow is: Hit the line hard; don’t foul and don’t shirk, but hit the line hard!”

But that isn’t what the story is about. It’s about an experiment: a school in Texas shut down their athletic program in the face of a budget crisis.

Last year in Texas, whose small towns are the spiritual home of high-school football and the inspiration for Friday Night Lights, the superintendent brought in to rescue one tiny rural school district did something insanely rational. In the spring of 2012, after the state threatened to shut down Premont Independent School District for financial mismanagement and academic failure, Ernest Singleton suspended all sports—including football.

To cut costs, the district had already laid off eight employees and closed the middle-school campus, moving its classes to the high-school building; the elementary school hadn’t employed an art or a music teacher in years; and the high school had sealed off the science labs, which were infested with mold. Yet the high school still turned out football, basketball, volleyball, track, tennis, cheerleading, and baseball teams each year.

Football at Premont cost about $1,300 a player. Math, by contrast, cost just $618 a student. For the price of one football season, the district could have hired a full-time elementary-school music teacher for an entire year. But, despite the fact that Premont’s football team had won just one game the previous season and hadn’t been to the playoffs in roughly a decade, this option never occurred to anyone.

“I’ve been in hundreds of classrooms,” says Singleton, who has spent 15 years as a principal and helped turn around other struggling schools. “This was the worst I’ve seen in my career. The kids were in control. The language was filthy. The teachers were not prepared.” By suspending sports, Singleton realized, he could save $150,000 in one year. A third of this amount was being paid to teachers as coaching stipends, on top of the smaller costs: $27,000 for athletic supplies, $15,000 for insurance, $13,000 for referees, $12,000 for bus drivers. “There are so many things people don’t think about when they think of sports,” Singleton told me. Still, he steeled himself for the town’s reaction. “I knew the minute I announced it, it was going to be like the world had caved in on us.”

Texas was smarter than Minnesota. Our local schools had a budget problem a few years ago; they gutted a fantastic theater program in response. They still have a football team, so I guess that wasn’t cut.

People are always trying to argue that these sports programs pay for themselves, and I don’t believe it for a minute. There’s a fair amount of deceptive accounting going on: when a college is sinking millions into a new stadium and flying coaches and players to Hawaii for a bowl game, you know there is a tremendous amount of cash flowing all which ways, and that it’s not an indulgence the school would spend to send the chemistry club to Iowa for a conference.

In many schools, sports are so entrenched that no one—not even the people in charge—realizes their actual cost. When Marguerite Roza, the author of Educational Economics, analyzed the finances of one public high school in the Pacific Northwest, she and her colleagues found that the school was spending $328 a student for math instruction and more than four times that much for cheerleading—$1,348 a cheerleader. “And it is not even a school in a district that prioritizes cheerleading,” Roza wrote. “In fact, this district’s ‘strategic plan’ has for the past three years claimed that math was the primary focus.”

Many sports and other electives tend to have lower student-to-teacher ratios than math and reading classes, which drives up the cost. And contrary to what most people think, ticket and concession sales do not begin to cover the cost of sports in the vast majority of high schools (or colleges).

But the real question is, what was the result of the experiment? Did unspent testosterone lead to region wide riots? Did unhappy, depressed students slump into nihilism and despair? Nope.

That first semester, 80 percent of the students passed their classes, compared with 50 percent the previous fall. About 160 people attended parent-teacher night, compared with six the year before. Principal Ruiz was so excited that he went out and took pictures of the parking lot, jammed with cars. Through some combination of new leadership, the threat of closure, and a renewed emphasis on academics, Premont’s culture changed. “There’s been a definite decline in misbehavior,” says Desiree Valdez, who teaches speech, theater, and creative writing at Premont. “I’m struggling to recall a fight. Before, it was one every couple of weeks.”

Suspending sports was only part of the equation, but Singleton believes it was crucial. He used the savings to give teachers raises. Meanwhile, communities throughout Texas, alarmed by the cancellation of football, raised $400,000 for Premont via fund-raisers and donations—money that Singleton put toward renovating the science labs.

That last line? Ernest Singleton is my hero. Here’s his picture. 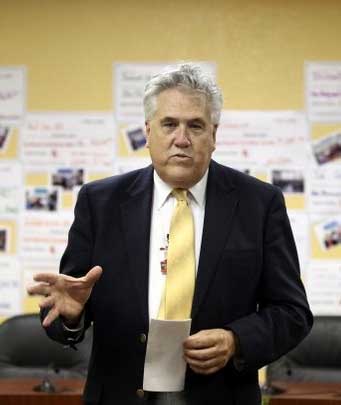 Ernest Singleton answers questions from school board members from across the state Thursday, March 7, 2013 at the Premont school district’s board room in Premont. On the wall hangs each of the large checks the district received from schools across the Coastal Bend to help Premont build their new science labs.

Now if only more schools would follow suit. School athletics are fine, if they are regarded appropriately, as light entertainment and an exercise in community engagement. It’s when they become the focus of the school that they become a destructive distraction.

I’m not the troll, but I think they caught one in their sample » « [Thunderdome]