There’s a study going around by Zuckerman, Silberman, and Hall that purports to show an inverse relationship between intelligence and religiosity. Here’s the abstract.

A meta-analysis of 63 studies showed a significant negative association between intelligence and religiosity. The association was stronger for college students and the general population than for participants younger than college age; it was also stronger for religious beliefs than religious behavior. For college students and the general population, means of weighted and unweighted correlations between intelligence and the strength of religious beliefs ranged from −.20 to −.25 (mean r = −.24). Three possible interpretations were discussed. First, intelligent people are less likely to conform and, thus, are more likely to resist religious dogma. Second, intelligent people tend to adopt an analytic (as opposed to intuitive) thinking style, which has been shown to undermine religious beliefs. Third, several functions of religiosity, including compensatory control, self-regulation, self-enhancement, and secure attachment, are also conferred by intelligence. Intelligent people may therefore have less need for religious beliefs and practices.

After reading the paper, I’m reasonably confident that they processed the data competently. However, I’d add a fourth interpretation that they don’t take seriously enough: that there was systematic bias in the intelligence studies they analyzed. I’m actually personally put off (bias alert!) by any study that attempts to reduce something as complex as intelligence to a simple number amenable to statistical analysis. The various studies measure intelligence by GPA (grade point average), UEE (university entrance exams), Mensa membership, and Intelligence Quotient (IQ) tests. Can you say apples and oranges? Yeah, I thought so. And anyone who has spent any time with Mensa people knows they aren’t particularly shining examples of crystal clear analytical intelligence, for instance.

But I would agree with the conclusion that studies have found an inverse correlation between religiosity and something they’re calling intelligence. But that doesn’t mean much.

This was a meta-analysis of 63 studies done on the corelation of intelligence and religiosity. Meta-analysis is a legitimate statistical approach, but it’s just as likely that what they’re detecting is a consistent pattern of abuse of the data, rather than that they’re actually observing a true psychological property of religious people. They’re using a grab-bag of studies; the first warning should be that work by Satoshi Kanazawa, Richard Lynn, and Arthur Jensen are tossed into the statistical stewpot. It cites Herrnstein & Murray’s The Bell Curve.

That’s right, they used Richard Lynn’s work — the guy who produced this gem of a graph. 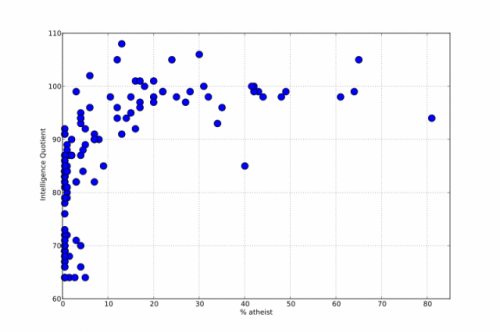 That’s a plot of average IQ of a country on the vertical axis against the percentage of atheists living in that country; each data point represents a whole nation. Apparently, there are entire countries on this planet where the average citizen has an IQ between 50 and 70 — that is, they are mildly mentally impaired, or capable of education at the elementary school level at best, and sometimes able to live independently. I think we can reject that nonsense out of hand.

Again, the statistics in the paper seem fine to my casual eye, but it really looks like a case of garbage in, garbage out. I’m not at all impressed that we can discern a trend when the floor is defined by people willing to embrace racist bullshit.

I thought the attempts to explain the pattern were quite nice, addressing a number of different hypotheses, and some of them were reasonable in trying to find a broader cause than simply “hicks is dumb”. But I had a hard time getting past the implicit bias in the study that they were looking at “intelligence”. I don’t think they were. I think you could find that ignorance is associated with religiosity — a lot of religions oppose education and insist on keeping certain segments of the population (i.e., women) as uninformed and uneducated as possible, and just that fact is going to skew the results to fit their conclusion. They also note studies that show the higher echelons of academia and educated individuals are less likely to be religious, and I can honestly believe that analytical examination of the claims of religion leads to a loss of faith. But we typically associate “intelligence” with something intrinsic to the individual, a biological property of their brains, and nothing in this study allows that conclusion to be made. The word is heavily loaded and entirely inappropriate.

Also, look at that graph again. If you throw out the obvious bias of classifying whole nations as mentally impaired, if you recognize that IQ is an artificial construct that measures a very narrow range of intellectual potential, it looks to me like the variation reduces to noise — that the supposed debilitating effects of religion are going to be very weak, if there at all. And what does that do to all the cunning rationalizations, no matter how plausible, for why atheists would do better on IQ tests?

I’m more inclined to accept Gregory Paul’s thesis that religiosity is coupled to socioeconomic status — that if you’re poor, you’re less likely to get the education that would help you see beyond the delusions of faith, and that also you’re going to be more reliant on the social safety net of your church. But it’s not lack of intelligence that is at the heart of religion, it’s class and emotional/cultural/historical concerns. Poor performance on IQ tests is simply a side-effect of discrimination and deprivation.

And, I must add, even if the correlation does hold up in studies that aren’t from racist jerks, it’s no consolation for you: your intelligence is a property of the individual, and being a member of statistically slightly superior group doesn’t confer any special abilities on you, other than the ability to hide behind Richard Feynman and pretend his brilliance somehow rubbed off on you. It didn’t, sorry.

I also think that Paul is closer to the solution: reduce socio-economic disparities, increase access to education, provide a secular social safety net, and you’ll get two effects: it’ll increase the knowledge of the population, and it will reduce religiosity. It won’t work by making poor people more “intelligent”, but it will increase their understanding and give them less reliance on religion — it will give already intelligent people opportunities to use their minds.

But it won’t make religion go away completely — smart people will still believe. And it won’t make all atheists uniformly non-stupid.

There has been a complaint that this paper didn’t actually use the data from the Lynn paper in their meta-analysis. This seems to be true. Although they do use data from Lynn’s coauthor, Nyborg, and certainly do cite the offending work without noting any caveats about its premises.

Why is anyone continuing to cite that sloppy work?