Every once in a while, someone chastises me for calling someone a liar. It’s rude, they say, and you don’t know if they’re intending to utter a mistruth, so you can’t really call them “liars”.

Oh, fuck that noise. When you get patent phonies like the Christians of Evansville, you have to call it as it is: they’re lying. Lying, lying, lying. The West Side Christian Church is putting up 30 crosses on the public streets along the riverfront, and they’re going to have them decorated by their vacation bible school. How can the city get away with permitting this blatant violation of the separation of church and state? By LYING.

The Board of Public Works has jurisdiction under city ordinance to approve or reject such requests, Ziemer said.

“We told (the church) they could not have any writing of any kind of them,” Ziemer said of the crosses. “So they are statues. They might be a religious symbol to someone or they might be attractive statues to someone else.” 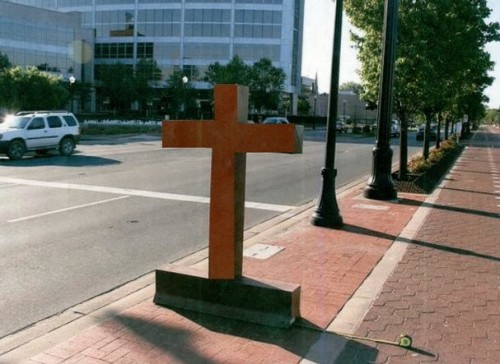 This is the same kind of stunt Christians tried to pull with the 9/11 “cross” they want to install as a memorial. The same thing they did with the Soledad cross. Somehow we’re all supposed to pretend that their obvious religious symbol, erected by a church, used as a prop for religious instruction, is supposed to be a merely secular symbol. Lies. And within the context of their own religion, worse — it’s a denial of a symbol of their faith. It’s total cowardice and dishonesty.

Of course there’s a poll. And of course the majority of godflogging pudtuggers in that town are for it.

Should West Side Christian Church be allowed to put crosses along the riverfront?

I have an idea. Let’s cast a decorative bronze statue of my ass, and erect multiple copies of it on Evansville’s streets. To some, they might be an obnoxious symbol of my contempt, but they might be attractive statues to someone else.