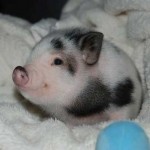 This is the lounge. You can discuss anything you want, but you will do it kindly. That pig looks too happy. I don’t trust it.

Tonight, on the Nones » « Dragons!