But only to laugh at it. Some new pseudoscientific ‘documentary’ has been released this week, titled Sirius, which apparently has everything in it: conspiracy theories galore, ancient astronauts, zero point energy, pyramids, UFOs, antigravity, war, top secret government agencies, and aliens. One alien at least; the big feature proving the existence of aliens from outer space is dessicated, tiny little corpse of an “alien” found in the Atacama desert.

I saw that and knew immediately what it was. It’s human. It’s simply a mummified fetus, in which the plates of the skull (still quite distinct) have collapsed on themselves as the flesh dried out.

Here are a few shots of the obvious. 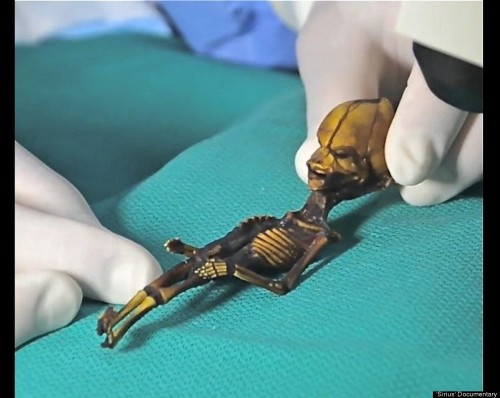 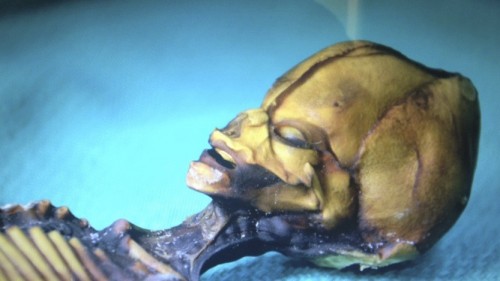 Apparently, the UFOlogists are all surprised now because they had a lab run some simple tests, and they returned the information that it was human — and an indigenous Chilean native, at that. Whoop-te-doo. Anyone other than a deluded fanatic could see that by just looking at the sad little thing.

I did find out one useful bit of information, though: a site with a skeptical summary of all the purported alien corpses that have turned up over the years, from shaved monkeys to deformed children to fake alien mannequins. I have to say that I rather liked the Siberian alien made out of bread crumbs and chicken skin. There’s some real artistic talent there.

I have to disagree with Jerry Coyne » « Creationism certainly does undermine education!