Oh, no, that was a terrible opening. You’ll only know what the heck I’m talking about if you remember JJ from the television show Good Times, and it’s such a pathetic joke it’s only going to appeal to grade schoolers. So if you’re a time-traveling 8 year old from the 1970s, you’ll appreciate the reference. How many of those are reading this right now?

Maybe this will work better. Here’s a small chip of shale I keep at my desk. 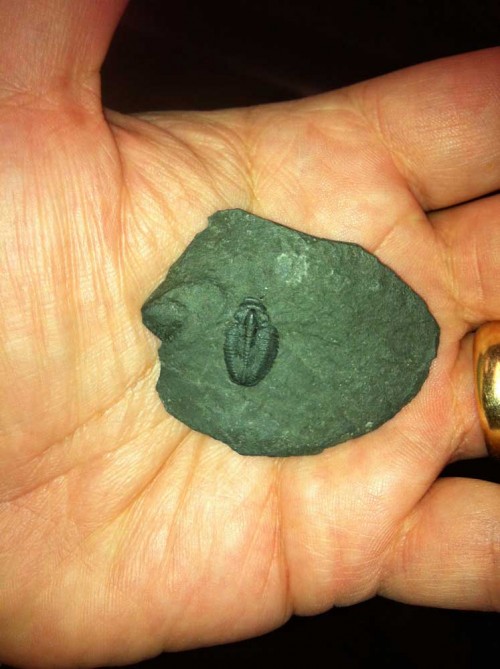 My son Alaric and I collected that on a trip to Delta, Utah over 20 years ago. We had permission from the owner of a commercial dig site to rummage around in their tailings*, and we ambled about picking up chunks of rock and splitting them with a hammer. Everywhere we looked were trilobites. We brought home a good haul, chiefly Elrathia, like that one, and lots of Peronopsis. I keep it at my desk as a token of a good memory, and also because it’s about half a billion years old.

I can reach over and touch a half billion year old fossil at will, which I find to be an awesome thrill. That it’s also from a subphylum that was so successful, swarming in our oceans for about 300 million years, yet that ended so finally in the Permian extinction, is humbling. Puny ephemeral humans — we can only dream of achieving the glories of the Trilobite empire. 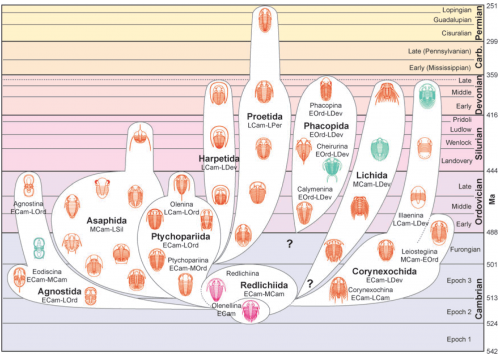 Summary of the evolutionary history of the major trilobite clades plotted against stratigraphic time. The y-axis scale approximates a log scale to permit the more detailed illustration of the Cambrian and Ordovician diversifications. Numbers refer to age in millions of years (Ma). Although the spread along the x axis approximates the morphological diversity within a clade at any given stratigraphic level, horizontal distances between groups should not be interpreted to suggest degrees of phenetic difference. The diagram is not meant to imply that maximal phenetic variance was present in the early part of the Cambrian, even though groups such as Agnostida and Corynexochida form the extremes along the x axis. This is an artifact of the mode of representation. Trilobite color represents the condition of dorsal exoskeletal trunk tagmosis: orange is the homonomous condition, pink is the heteronomous condition in which the batch boundary occurs within the holaspid thorax, blue is where this boundary occurs within the holaspid pygidium, and green where it occurs at the thoracic/holaspid pygidial boundary. The representation is schematic and not meant to imply that all members of these clades younger than the image shown had that condition.

If you want to learn more about trilobites, I can’t recommend Richard Fortey’s book, Trilobite: Eyewitness to Evolution

, highly enough. It’s an excellent, enthusiastic, readable overview of the group. There’s also a gorgeous online guide to the orders of trilobites that’s full of fossil photos and detailed information. But I also recently stumbled across a review paper by Nigel Hughes that looked at them from the perspective of development — O Rhapsody! It’s beautiful!

Despite being extinct for 250 million years, and despite being nothing but fossils, we still have a pretty good idea of the development of trilobites, because they were so numerous and we can find great drifts of entire populations of the animals embedded in lagerstätten. That allows us to see the range of variation and the distribution of different developmental stages, and further, because they’re arthropods, we can see well preserved cuticles of both intact animals and molted shells. And with almost 300 million years of recorded species, we’ve also got a good picture of their evolution. This is a classic evo-devo story.

So, quick, here’s a general introduction to trilobite anatomy. First thing to know is that the ‘three lobes’ of the word ‘trilobite’ refer to the longitudinal divisions of the animal: a central axis with a lateral or pleural lobe on either side of it. There are also, usually, three transverse divisions: cephalic (head) segments, thoracic segments in the middle, and a pygidium or tail. 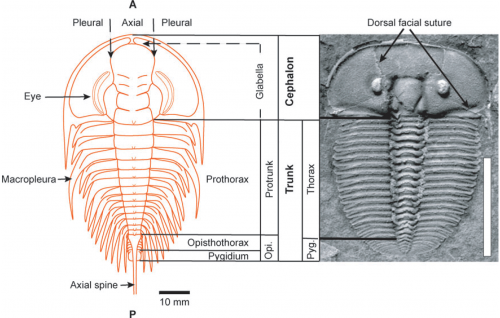 Basic anatomy of the dorsal surface of two trilobites. (Left panel ) The figure is based on a generalized olenelloid trilobite, which had a boundary between two distinct or heteronomous batches of segments located within the thorax, dividing the protrunk from the opisthotrunk. (Right panel ) Aulacopleura konincki displayed the homonomous trunk condition in which all trunk segments shared a similar morphology. A, anterior; Opi, opisthotrunk; P, posterior; Pyg, pygidium.

Not usually shown are the limbs. If you flip over a trilobite, you discover that each segment, except the anterior- and posterior-most, has a pair of biramous appendages — they’re branched legs, with one branch functioning as the walking limb, and the outer branch being lamellate (thin and flat) and probably functioning as a gill. They’re surprisingly uniform and consistent in general structure, from head to thorax to pygidium. One of the curious features of trilobites is that most species are marked by this homonomous condition (that is, maintaining identity or close similarity between adjacent segments), while most of the extant arthropods are strongly heteronomous, making strong distinctions in the structure of adjacent segments.

Major divisions of the anterior-posterior (a-p) body axis in trilobites. The letter M indicates an individualized segment morphotype. Colors indicate major morphological divisions along the axis, with shading approximating the degree of morphological difference between adjacent segments. Segments in red are cephalic, those in light blue are thoracic, those in dark blue are pygidial, and the terminal piece is in purple. Thoracic segments articulate with one another, whereas those in the cephalon and pygidium are conjoined.

Now here’s the cool bit: a generalized staging series for trilobites. There are some broad terms for different stages — protaspid, then meraspid, then holaspid — but this diagram makes it clear that growth was by sequential addition of new segments to the posterior end of the animal. This is not an unusual pattern: vertebrates also build segments sequentially from front to back, as do many insects (the short germ band insects), but others, long germ band insects like flies, build the whole collection nearly simultaneously. 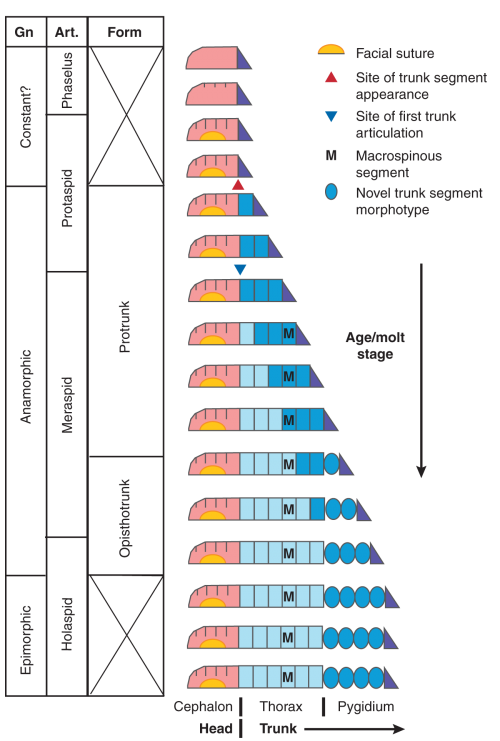 Generalized trilobite ontogeny showing the boundaries of ontogenetic stages based on three aspects of the development of trunk segments: generation (Gn), articulation (Art), and morphology (Form). The generation state contains a poorly known initial stage that may have had a constant set of cephalic segments, the anamorphic phase during which new segments appeared in the trunk, and the epimorphic phase after which the exoskeletal segment number was constant despite continued molting. The articulation state is based on dorsal sclerite articulation pattern, with the onset of the protaspid stage marked by the development of the dorsal facial suture, onset of the meraspid stage marked by the onset of trunk articulation, and the onset of the holaspid stage marked by the completion of trunk articulation. The morphology state refers to the form of trunk segments, which in some trilobites are divided into discrete, heteronomous batches of anterior (protrunk) and posterior (opisthotrunk) segments. The site of the appearance of new trunk segments is shown for the first trunk segment only. Segment color scheme as in previous figure. Individualized segments, such as those that bore unusually large axial or pleural spines (i.e., a macrospinous condition), retained the same position relative to the cephalic margin following their first appearance, indicating that the site of appearance of new segments was subterminal, and the boundary between articulating and conjoined segments migrated posteriorly during the meraspid phase.

Development is the foundation of evolutionary change, and I can’t help but wonder how this pattern, and the unknown genetic constraints behind it, affected trilobite evolution. The early history of arthropods seems to be one of exuberant exploration of the potentials of that modular segmental organization, with trilobites tending to be more conservative than other arthropods. What that means is tricky to interpret: the more inventive arthropods still have descendants around, while trilobites are extinct without issue. But 300 million years is still a fantastically good run, and clearly they had the flexibility to survive major changes in geological history.

The real mystery is why the clade as a whole began to decline after the Ordovician, and how the end of the Permian could so thoroughly quench this gigantic group.

*By the way, I recommend digging in fossil beds as a great way to connect with the history of the planet with your kids. You can’t make it to Delta? There are quarries that will sell you crates of unprocessed rock, 30 pounds for $75, and you can take them apart in your back yard.

I remember that poster! » « For shame, TEDx