I have a bit of a peeve with a common analogy for the human genome: that it is the blueprint of the body, and that we can find a mapping of genes to details of our morphological organization. It’s annoying because even respectable institutions, like the National Human Genome Research Institute, use it as a shortcut in public relations material. And it is so wrong.

There is no blueprint, no map. That’s not how the system works. What you actually find in the genome are coding genes that produce proteins, coupled to regulatory elements that switch the coding genes off and on using a kind of sophisticated boolean logic. Each cell carries this complex collection of regulated genes independently and identically, but the boolean logic circuits produce different outputs varying with the inputs from the environment and the diverging histories of each cell. For instance, there is no code anywhere in the genome that commands the forelimbs to make five and only five digits: instead, a cascade of genes and cell movements produce a patterned tissue that in us contains sufficient mass and is of a size to generate five nuclei of condensing tissue that produce fingers.

It’s better to think in terms of cellular automata. The embryo is a pool of autonomous cellular robots that have general rules for how they should respond to environmental cues…and those cues tend to vary in predictable ways across the embryo, leading to a consistent cascade of action that produces a relatively consistent complex product, the multicellular organism.

The unfortunate consequence of those properties, though, is that you’ll never be able to look at a single gene from the genome and sort out what it does in the embryo. All the genes will be rather cryptic; you might be able to figure out that, for instance, the gene codes for an adhesion protein that makes the cell stick to a certain other class of cell, and that it’s switched on by gene products X and Y and turned off by gene product Z, but obviously you won’t be able to figure out its role until you figure out what activates genes X, Y, and Z, and whether the cell happens to be in a particular adhesive environment. And then when you look at X, Y, and Z, you discover that they have similar patterns of conditional logic in their expression.

Hey, let’s all give up. This stuff is too hard.

No, let’s not. What it means is that you can’t derive the organism from the mere sequence of the genome — that is, the genomic information is not sufficient to comprehend morphology, because developmental processes add extra-genomic information to the generation of the organism. It means developmental biologists have job security (yay!), because the only way to decipher what is going on is to work backwards, from morphogenetic/physiological events to the underlying genes involved. This is not to imply that the genomic information is unimportant, only that understanding it requires complementing it with an understanding of cell:cell interactions, signaling, signal transduction, induction, and molecular patterning…all stuff that developmental biologists love.

Now if all you get from this is that the genome and organism are complex, interlocking, interdependent features that are so immensely and tightly integrated that evolution must be impossible, you aren’t thinking like a developmental biologist yet. Ask an evo-devo person about this stuff, and they’ll tell you that this is great…the way development works makes evolution of form easy.

That’s because there is no blueprint. What you have instead is a collection of flexible robots that have this property called plasticity: give them a novel environment or condition, and they don’t curl up and die and do nothing. Instead, they just follow the rules they’ve got and try to make something coherent out of whatever situation they find themselves in. They aren’t committed to making five fingers in any way; give them a reduced tissue mass, or an enlarged mass, or a variation in the signaling environment, and they’ll build something. And often it’s something surprising. Development is really, really good at producing emergent properties, precisely because it is autonomously rule-based rather than blueprinty.

All this buildup has a point: there’s an evolutionary issue that has a developmental resolution. It’s some really cool work on the development of the limb.

So I work on zebrafish. They don’t have limbs, obviously, but they do have fins where we tetrapods build legs and arms. Fins are thin membranous folds of ectoderm (our fancy word for skin), infiltrated with thin rods of cartilage called fin rays. Developmentally, they arise from things called fin folds — flaps of ectoderm that flatten to form a double-walled sheet.

In development, tetrapods add an extra element to the fin fold: mesoderm, that tissue that forms bone and muscle, expands to fill the fin fold with the raw material of a muscular, bony limb.

You can visualize the developing limb as something like a slab of pita pocket bread. Fish are content with just the bread, giving it a little reinforcement, while tetrapods open up that hollow space and stuff it full of filling. That filling represents a field of great potential, which is then organized in reproducible ways to make limb bones and digits and muscle. The question addressed here isn’t about the precise organization of the limb, but a more general one about where all that tasty filling came from in evolution.

We have hints. There are genes switched on in the distal part of the fin/limb that are more strongly activated in tetrapods than in fish; these genes are associated in space and time with an increase in the volume of mesodermal tissues. The gene of interest here is called Hoxd13. It’s one of a well-known array of genes that are responsible for patterning the body axis, some of which have also been recruited into patterning the limb. The hypothesis is that expressing greater levels of Hoxd13 in a fish fin would lead to an expansion of mesoderm that would be a potential evolutionary precursor to turning a fin into a leg.

So here’s what Freitas and others did, and this just blows me away that we can do these kinds of transgenic experiments routinely nowadays. They made a construct of a Hoxd13 gene coupled to a glucocorticoid switch: just by exposing the developing fish to dexamethasone (Dex), they can turn the gene on. It’s like adding a volume control to a gene that they can turn up at will. They also used other techniques, coupling Hoxd13 to a heat shock promoter, so they could also turn it on just by putting the embryos in warmer water. It’s power. We can have complete control of a gene, and ask what happens when we overexpress it in a fish.

When you activate Hoxd13 at an appropriate stage in fin development, here’s a diagrammatic illustration of the results:

“Ed” is the endoskeletal disc; it’s the mass of mesodermal tissue that is found at the base of the fish fin, and that fills the whole tetrapod limb. “Ff” is the fin fold, the ectodermal flap that makes up the fin. “Ff” is the pita bread, “Ed” is the filling.

Switching on an excess of Hoxd13 has a couple of effects. One is that another gene, cyclin d1 is also turned on at a higher level. The cyclins are cell cycle regulators; amping up this gene leads to greater proliferation, so more mesoderm is made in this region. This mass then floods into the fin fold, building a lumpy meaty mass that does the poor zebrafish no good, but looks like the core of a limb.

The fish does not build a hand or digits; it lacks the rules to carry out that degree of differentiation. But look at the limbs of these fossils from the fish-tetrapod transition. 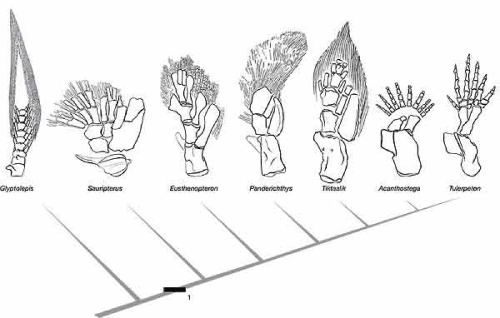 There’s a lot of anatomical exploration going on in this series. This fits a model in which tetrapod ancestors carried a genetic variation that expanded the core of mesodermal tissue in their fins, which was then organized by the standard rules of limb mesoderm into bone and muscle. Again, this is opportunity, a new field of potential that in these early stages of evolution hadn’t yet been refined into a specific, and now familiar, pattern, although elements of that pattern are foreshadowed here.

This morphology fits a simple developmental model. The ancestral change was nothing more than the addition of new regulatory enhancers (and they have a candidate, called CsC, which is found in mouse but not zebrafish) that increased the expression of Hoxd13, which in turn led to an expansion of the raw material of limb mesoderm, which was then shaped by existing developmental rules into a crude bony, muscular strut. 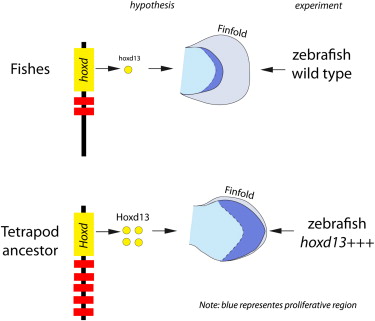 Subsequent evolution refined that structure into a more specific limb morphology by layering new rules and new patterning elements onto the existing framework of genetic regulators.

So how did fish get legs? By progressive expansion of tissue that was then used autonomously by existing genetic programs to form a coherent structure, and which was then sculpted by chance and selection into the more familiar and more consistent shape of the tetrapod limb. Add raw material first, and the plasticity of developmental rules means that the organism will make sense of it.

The details are complicated, but complexity enables emergent evolutionary novelties. And that’s something beautiful about evolution and development.

O’Reilly and the talking fetus opposition to abortion » « Around FtB