Beneath the mysterious waters of the Sea of Japan, strange symbolic artworks have been spontaneously appearing — intricate mandalas, six feet in diameter, dot the sandy bottom. What could they mean? 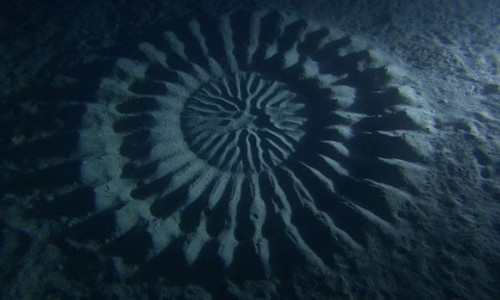 Perhaps the aliens have been making these all along, at the same time they’ve been sending secret messages in crop circles. Perhaps they are manifestations of the Universal Consciousness, erupting into expressions of cosmic beauty. Maybe their meaning is their mystery, telling us to appreciate more what we do not know.

Nah, I don’t go for any of that mumbo-jumbo. Scientists put video cameras underwater, and caught the creator in the act. It’s this little puffer fish, a few inches long. 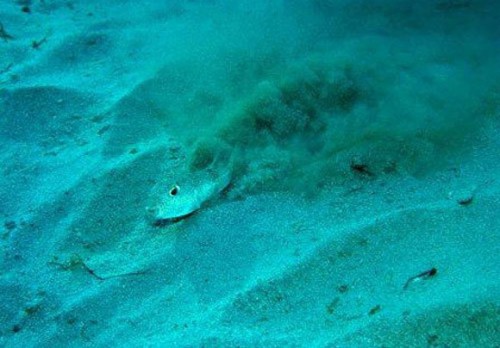 Using underwater cameras the team discovered the artist is a small puffer fish only a few inches in length that swims tirelessly through the day and night to create these vast organic sculptures using the gesture of a single fin. Through careful observation the team found the circles serve a variety of crucial ecological functions, the most important of which is to attract mates. Apparently the female fish are attracted to the hills and valleys within the sand and traverse them carefully to discover the male fish where the pair eventually lay eggs at the circle’s center, the grooves later acting as a natural buffer to ocean currents that protect the delicate offspring. Scientists also learned that the more ridges contained within the sculpture resulted in a much greater likelihood of the fish pairing.

Around FtB » « Why I am an atheist – Garry J. VanGelderen