Sometimes, following the path scientific results take as they enter more mass media awareness really is like a game of telephone — you can scarcely recognize the original work in the final summary that ends up in the news media. And sometimes, you find that the scientists contributed to the ghastly mess.

Take a look at this silly story, “Could ‘Advanced’ Dinosaurs Rule Other Planets?”, illustrated with a picture of a T. rex stalking the landscape. 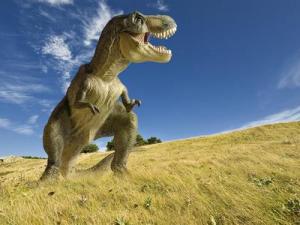 New scientific research raises the possibility that advanced versions of T. rex and other dinosaurs — monstrous creatures with the intelligence and cunning of humans — may be the life forms that evolved on other planets in the universe.

Yeah. Right. I’d like to know what kind of research is finding intelligent dinosaurs on other planets. All you have to do, though, is read beyond the first paragraph to discover that this is from an article published in the Journal of the American Chemical Society, that it is entirely about the chirality of prebiotic chemistry, and that its primary speculation is that the predominance of left-handed, or L amino acids, in our biochemistry is a consequence of a bias in the delivery of extraterrestrial amino acids to Earth…that biology expanded on a bias in the handedness of the raw materials at the beginning of life.

This work answers some of the questions in the general idea that the unusual amino acids delivered to Earth by the Murchison meteorite and related ones could have led to the dominance of L amino acids and D sugars on early Earth that would permit life to start.

OK, it’s a kind of fundamental chemistry. I didn’t dig too deeply into the science, mainly because I was terribly put off by the abominable English in the paper. Try to make sense of that sentence above; it’s an abomination, a muddle that confuses a modern instance, the Murchison meteorite, with ancient sources, and also is a general tangle of referents. Don’t chemists have to take a writing course somewhere in their careers?

An implication from this work is that elsewhere in the universe there could be life forms based on D amino acids and L sugars, depending on the chirality of circular polarized light in that sector of the universe or whatever other process operated to favor the L α-methyl amino acids in the meteorites that have landed on Earth. Such life forms could well be advanced version of dinosaurs, if mammals did not have the good fortune to have the dinosaurs wiped out by an asteroidal collision, as on Earth. We would be better off not meeting them.

Clumsy English again, but worse, it’s stupid biology. Animal-like creatures that might evolve on other worlds will not be and cannot be dinosaurs. There is no reason to imagine that a saurian-mammalian transition is anything but a particular quirk of our particular planet’s evolutionary history — it is not a universal. This is nothing but badly written nonsense.

It is published in JACS in their “just accepted” category, which means the science has passed peer-review, but hasn’t been edited or formatted or proofed by the author. I hope that stupid paragraph gets cut; I also hope someone competent at writing in the English language takes it apart.

But the author ought to be a bit embarrassed at his ignorance of biology, and Science Daily ought to be ashamed about taking an idiotic paragraph and turning it into sensationalistic garbage.

Although, you know, if you want to make your scientific research newsworthy, all you’ve got to do is toss in some babble about extraterrestrial super-intelligent T. rexes, and it will get lots of attention. Maybe you think it isn’t relevant to your research, maybe you do psychology or statistics or bioinformatics or epidemiology or ethology…it doesn’t matter. Throw it in anyway. That’s what happened in this paper, after all.