I’ve written about the spectacular phospatized embryos of the Doushantuo formation before. It’s a collection of exceptionally well preserved small multicellular organisms, so well preserved that we can even look at cellular organelles. And they’re pre-Cambrian, as much as 630 million years old.

They’ve been interpreted as fossilized embryos for which we have no known adult forms. They certainly look like embryos, but one thing has always bothered me — they all look like blastula-stage embryos at various points in their early divisions, and the absence of later stages was peculiar: how did gastrulae and neurulae and other stages avoid getting preserved?

One explanation was that we weren’t seeing metazoan fossils at all — they were colonies of large bacteria. That’s disappointing if you have an animal bias, but still cool — as I pointed out then, it just highlights the fact that the transition from single-celled to multi-celled life isn’t that remarkable.

Now we have another alternative explanation that seems even better to me: they aren’t animals, and they aren’t bacteria, they’re protists. Some of the Doushantuo specimens are rather peanut-shaped, and others are vermiform, odd for an animal embryo, but entirely compatible with the idea that these are encysted stages of propagating protists.

Here are some of these oddly shaped Doushantuo specimens. 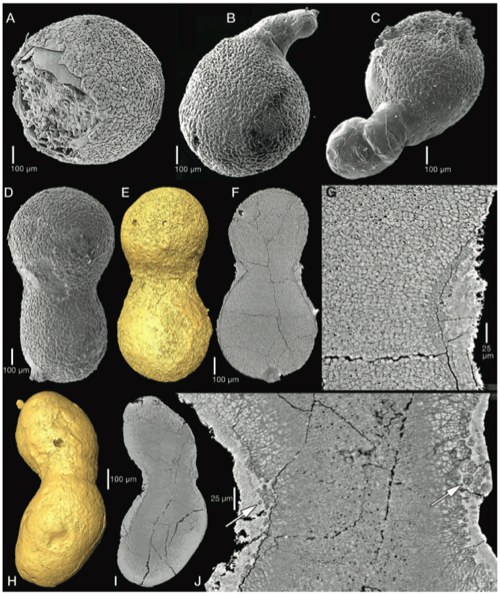 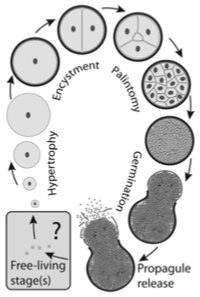 Their proposed explanation convinces me. These were protists that were single-celled in their free-living stage which would periodically grow hypertrophically and encyst, forming a capsule containing the dividing cells. These cells would replicate at differnt rates, forming zones of maturation; eventually, the cyst would rupture, released a cloud of propagules, or spores, and the life cycle would begin again.

That would explain a lot about the distribution of forms in these phosphatized specimens — we don’t find any gastrulating embryos because there never were any. These weren’t animals, period!

They belong outside crown-group Metazoa, within total-group Holozoa (the sister clade to Fungi that includes Metazoa, Choanoflagellata, and Mesomycetozoea) or perhaps on even more distant branches in the eukaryote tree. They represent an evolutionary grade in which palintomic cleavage served the function of producing propagules for dispersion.

That’s still very interesting, and again, it reminds us that the transition to multicellularity had many antecedents and could have been reached by many different paths.