Geoffrey Pearce sent me this argument he uses with creationists, and I thought others might find it useful, too.

I am regularly approached by young Earth creationists (yes, even in the bedlam of sin that is Montreal…) both on the street and at home. If I have the time I try to engage them on the age of Earth, since Earth is something whose existence them and I agree upon. They will tell me that Earth is somewhere between 6,000 – 10,000 years old, and, when prompted, that the rest of the universe is the same age as well. I have taken the approach of responding to this assertion by pulling out a print of the far side of the Moon (attached, from apod.nasa.gov). 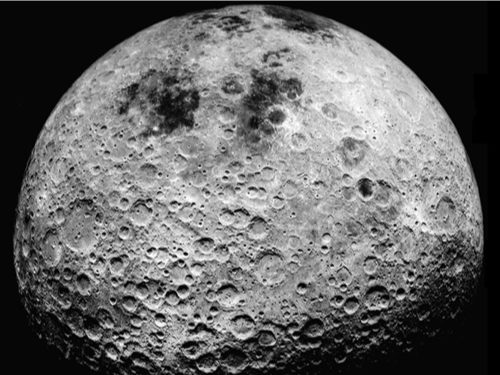 I cannot tell you how handy this is! Once they’ve had a good look I usually point out that almost all of the craters were formed by asteroids smashing into the planet, and that the Moon has over 250 craters with a diameter of 100 km or more. After explaining that Earth is just as likely to be struck by large asteroids as the Moon (is more likely to be struck, in-fact, due to its greater gravitational well), I then ask them to consider what their time-scale entails: that Earth should be struck every couple of decades by an asteroid capable of completely ejecting an area about the size of New Hampshire (not to pick on New Hampshire). Since such an event has never been observed and there are no well-preserved impact structures anywhere close to this size range, I then suggest to them that the only sensible conclusion is that Earth is much older than they had thought.

This may seem a convoluted way of making a point about Earth’s age, in particular since more precise and direct dating methods than crater counting are used for Earth, but I think that it may have an important advantage. In the past I have tried explaining to creationists how our understanding of Earth’s age is obtained, but they seem to take the “what I can’t see isn’t real” attitude when they hear words such as “radioactivity”, and “isotope”. Conversely, many of them seemed to be somewhat shaken after seeing this image and hearing my explanation, with one even admitting that the Moon looks “very old”. Furthermore, such images are a good starting point for discussing the degree to which chaos and uncertainty are inherent to the universe. Yay!